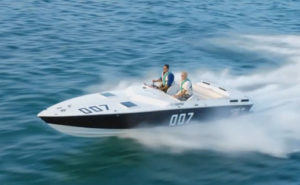 All of us at Magnum Marine hope you are staying safe. As we see South Florida parks, marinas, and golf courses reopening, we encourage you to continue social distancing and boating safely. We know Palm Beach, Broward and Dade are facing tougher challenges, so we just want everyone to social distance and be responsible. Read the article below for more information on this new development.

After more than six weeks in quarantine, South Floridians made their way to newly reopened parks, golf courses, and marinas on Wednesday, the first day they were welcomed back to wide-open spaces of fresh air and sunshine.

At Silver Lake Park, Zach Hoke of Boca Raton was happy to take his boat out for some early morning recreation. “We were out bait fishing,” Hoke said. “If everybody obeys the rules, we will be OK.”

At Lake Boca Raton, where boaters were heavily criticized last month for gathering in large groups, the scene was very different Wednesday. Boaters at the sandbar were respecting the social distancing orders and requirements that boats be anchored 50 feet apart.

Local governments’ decision to reopen many of South Florida’s outdoor destinations has drawn cautious support from some disease experts, who said it may not be too early to start returning to some normalcy. They think there could be little risk of getting infected by the new coronavirus if people follow social-distancing rules.

Leslie M. Beitsch, chairman of the Department of Behavioral Sciences and Social Medicine at the Florida State University College of Medicine, said it would have been more advisable for the region to wait until there were more widespread testing and thorough “contact tracing” available to track and block the spread of the coronavirus.

While several cities followed their county’s lead by agreeing to reopen their parks, others opted to keep them closed, concerned it’s still too early to lift restrictions and risk the spread of the virus.

Beitsch did not oppose the step of reopening parks with social distancing in place, but he recognized it as riskier than a continued full quarantine. “It is a bit like building an airplane while it’s flying,” he said of the reopening. “It’s a bit of a challenge.”

Following the rules didn’t seem to be much of a problem Wednesday — parkgoers and boaters had plenty of space to avoid one another, and they were required to carry face masks just in case they got too close to each other, though some went without the protective barrier.

Broward Sheriff’s Office spokeswoman Veda Coleman-Wright said deputies and police officers were hopeful that people would comply with social distancing. “We’re all in this together,” she said. “The last thing deputies and officers want to do is assist park rangers with removing someone because he’s not following the rules.”

At Brian Piccolo Park in Cooper City, dozens of cars in the parking lot showed many families had jumped on the opportunity to show up. But parkgoers were spread apart one from another — a lone jogger near the softball fields, a bicyclist making his way through the parking lot.

Douglas Mariano, 50, of Boca Raton, was at the boat launch at Silver Palm Park with his wife, Luciana, and their daughter. Their daughter had just finished online classes Wednesday afternoon and they took their paddleboards out to the Intracoastal to get some sun and fresh air for the first time since the park was shut down.

“We’ve been kind of frustrated to have to stay home and not be able to go outside and do any activities. So we’ve been looking forward to today and finally they gave the green light, so as soon as our daughter finished her classes this morning, we ate something and now we’re here to go paddle a little bit,” he said. “This gives us something to do outside. We’re not really people who like to stay inside all the time. We’re very much outdoors kind of people.”