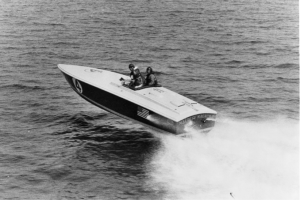 When Don Aronow launched the Maltese Magnum 28′, also later known as the Magnum 27′,  it immediately set the tone for the company as a builder of strong and reliable powerboats. Read below for more on the history of this incredible boat, and check out 2 original stickers for the teams!

In 1966 Don Aronow, now an offshore champion and boat builder built himself a new 27′ race boat, which he named “Maltese Magnum”. The boat became World Champion and Don Aronow built a small factory to build more boats just like it: Magnum Marine was founded.

Aronow built his new factory on NE 188th Street in North Miami. Magnum Marine still resides here as the last boat builder. In another two years, he was to build a third factory on the street, Cigarette. Thereafter, the street was called Thunderboat Row. Don Aronow also built a 35′ race boat; both the Magnum27’ and the new 35′ were winning championships all over the world. To these two very successful models, Don Aronow added a 16′ ski boat, the Marauder, and a 16′ tunnel hull, the Missile.

Below are some original stickers from the racing team! (Photos Courtesy of Christian Toll) 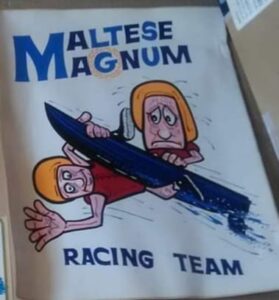 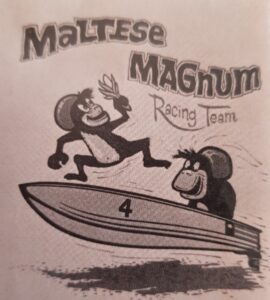