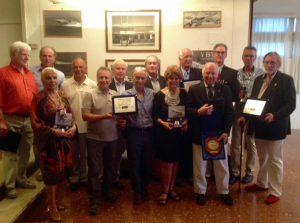 At the end of July, thanks to the collaboration between the Club Nautico Versilia (with President Roberto Brunetti), the Assonautica Lucca Versilia (with President Alexander Cinquini), and the Centre for Sea Studies (with researchers and historians of the competitions, offshore powerboater Marco Bertini and Gianni Giampaoli), Viareggio and Versilia had a blast from the past, returning to be great protagonists of the offshore and International powerboating scene.

After four days, in fact, they successfully completed the 1st International Gathering Historical of Offshore boats – antique boat Award “VBV Legend, which, thanks to the excellent response from the numerous Italian and international riders and speakers (among them Nick Vanoff, Bob Saccenti, Sonny Miller, Tim Brand-Crombie, Gale Jacoby-Petronis, the family of the world champion Vincenzo Balestrieri, Maurizio Ambrogetti, Pietro Silva, Fulvio Maria Ballabio, the local champion Moreno Di Giusto and many others), it is It was a wonderful opportunity to recall the summer classic Viareggio-Bastia-Viareggio.

Though, the response of pilots and historians of the participants wasn’t the prime focus, but many boats were present, in great conditioned, confirming that the racing between deep-sea speedboats, known around the world and organized in July 1962 to ’92, still manages to arouse much interest.

Much appreciated by all participants, also an aperitif on the fascinating motor yacht vintage Red with shipowners Piero Maria (President of the Riva Historical Society) and his wife Mariella, a gala dinner in the halls of CN Versilia was organized on Saturday evening featuring the awards ceremony with the presentation of awards, the static display of restored vintage boats staged in front of the CNV, and the parade from the square of the Viareggio harbor in Marina di Pietrasanta.

This article was originally posted on VersiliaToday.it.