The Tough and Reliable: The Magnum 40′ Barbarian Patrol Craft

Survival of the Barbarian 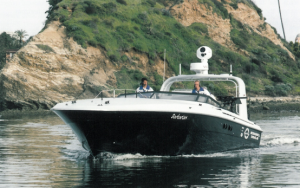 In 1996, after the patrol craft (Magnum 40′) had been in operation for a few years, Katrin received a very complimentary letter from McDonnell Douglas.

“The Magnum-McDonnell Douglas ‘Barbarian’ has recently returned from a demonstration tour of the Middle East and has recently been tested by the US Navy Seal community. The boat was evaluated by the most elite fighting forces in the world. I am both pleased and actually quite proud to report to you that the Magnum not only survived such ‘barbaric testing,’ but that it has greatly exceeded our highest expectations. It has proven to be a tough, reliable, and exceptionally seaworthy craft, which provides excellent performance even in adverse sea conditions. From our experience, the Magnum is structurally, mechanically, and electrically superior to any boat in its class.”

“I recollect making a sea trial in this patrol boat with its significant gun mounted on the foredeck and the cockpit and arch mast crammed with electronic systems,” writes Dag Pike. “The gun was fully automatic and stabilized so that, once it was locked on, it would remain pointing at the target irrespective of the movements of the boat. That was only part of the sophistication, because the gun could also be controlled remotely by someone sitting at a screen in an office thousands of miles away. The aim was to reduce the boat crews to a minimum and make the unit almost a fully automatic system. It was probably the long-term aim of the project to take the crew out of the equation entirely.”

“It was eerie watching that gun move of its own accord while we simply drove the boat hard along the Florida shore. Of course, the 40’ behaved in exactly the way that you expect from a Magnum, with the precise fingertip control on the wheel and the throttles, and the boat responding to every demand.”

It was experience like this that made Magnum a front-runner in a military contest to find a high-performance patrol boat for use by the US Navy Seals. The Mark V patrol boat was designed for the Seals; it was to be an attacker as well as a landing craft. The demands on the design were severe. The boat had to be air transportable, which limited the size to around seventy feet; it had to carry a considerable weight; and it had to have very high performance, over 60 knots.

The concept developed by Magnum, together with McDonnell Douglas, was based on the Magnum 70 hull, powered by two 16V92 Detroit Diesels and coupled to a pair of Arneson Drives; this military version had machine guns mounted around the cockpit and a cannon on the foredeck.  There was seating for the sixteen Seals below deck, along with a galley and a bathroom. Four fuel tanks ensured  long range.