The Design Story Behind the Flagship: Magnum 80 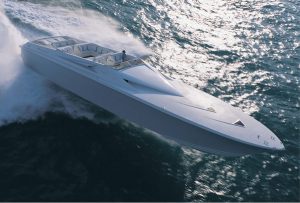 The concept of an even larger yacht had been around since a client had asked Filippo to build a Magnum 90 many years before. The client felt that a 90’ was really too large, mainly because of regulatory reasons, and in 1996 he asked Katrin to build him a Magnum 80. He already owned a Magnum 70, but wanted more interior accommodation but with the same seaworthiness, speed, and the characteristic Magnum hull.

Since the hull would follow the Magnum deep-V concept that had been used throughout the Magnum range, Katrin had no problem explaining what she wanted to one of the most experienced high-performance naval architects, Michael Peters. Michael knew what was expected from a Magnum: the dry, fast, maneuverable, seaworthy hull, and he not only succeeded brilliantly, but he was also able to incorporate major weight savings with composite technology. He combined the characteristic Magnum solid-glass bottom for impact strength with the epoxy foam-sandwich construction from the chines to superstructure. This preserved the yacht’s ability to handle any unexpected impacts, while making it lighter and faster.

Katrin looked positively regal at the helm of her new flagship, racing across the ocean. Powered by a pair of 2400 HP MTU diesels coupled to Arneson surface drives, she could reach a top speed of 60 mph. Early viewers praised the speed and handling abilities, and the sheer power of the 4800 horses in the engine compartment. The cockpit, thanks to the robust construction, also makes a quiet sanctuary.

She is so large and silent that she seems to glide effortlessly over even rough seas. The Magnum 80 has come to symbolize the builder’s ability to mix elegance with size, speed with seaworthiness. It has held its looks, too—a testament to the brand’s timelessness.