A Story From the Life of Don Aronow 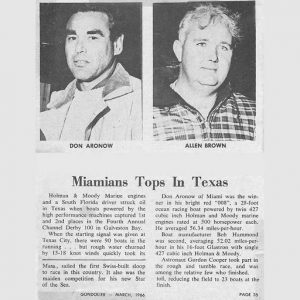 The story of how Don won the Fourth Annual Channel Derby 100 in Galveston Bay, as told by Allen Brown.

After selling Donzi Marine to Teleflex, Inc. in April 1965, Don Aronow started up Magnum Marine next door, in the spring of 1966. The basis of Magnum was to be the 35’ Donzi, designed by Wynne and Walters (mostly Walters) for Donzi. Don had sold me with the company, and we were selling little Donzis hand over fist. The employees at Teleflex decided to give the 35’ Donzi to Aronow, in return for his racing for Donzi. Don raced it with very mild success in a few races. Don named the big wide boat “Big Bad Donzi” after himself, perhaps. He was still ‘persona non grata’ with Mr. Kiekhaefer at Mercury Marine, so he was using Holman Moody engines in the larger boat, with the thought that he might win the rougher races. In those days, we raced no matter what the weather. In the summer of ’66, Bill Wishnick messed with Aronow’s big boat plan when he purchased the 32’ Aluminum Maritime, which had carried Jim Wynne to several race victories in the US and abroad.

The Maritime was clearly the best offshore boat on the circuit, with a mix of good speed, with its twin 600 HP trouble–charged Daytonas, and a fierce head sea performance at about 15,000 pounds gross weight with the ballast tank full. The ballast tank, which moved the center of balance further forward, and held the bow down (no trim tabs back then) was controlled by the crew with a couple of valves to fill and empty it. It wasn’t all fun and games. The Daytona engine turbochargers glowed white at full throttle, which was most of the time, and the boat had integral fuel tanks which always leaked. On a dark day, the turbos lit up the entire engine room, so that one could watch the 115/145 aviation gasoline squirting out of the bottom of the fuel tanks. The first match–up between Big Bad Donzi and Wishnick’s now named “Broad Jumper” was in the spring of 1966 at the Gateway Marathon race from West Palm Beach to Lucaya, in the Bahamas, and return. The wind was blowing 15 to 20 knots out of the northeast, and it was rougher than hell. They postponed one day after a vote, but all the business men and women agreed to run the next day.

I was still driving for Bill in the difficult races, and I started the race. Aronow took off like a shot. He was about half a mile ahead in ten minutes, and we could see him flying high above the waves, looking down on the seagulls. We were still learning our new boat. Bobby Moore was our riding mechanic, and we all shared one of our best hangovers, from drinking Sake at the Jap lunch place the day before. No one dreamed that we would race the next day. I think I remember that the check was over a hundred bucks for the four of us. The fourth was Mark “Big Dirty” Raymond, Bobby’s backup mechanic. Aronow broke very quickly, no surprise, and we slugged it across at a sparkling 32 MPH. We won the first leg by an hour. In the middle of the Gulfstream, the seas were mountainous. We kept the ballast tank full, to minimize jumping, but the downhill run on the enormous waves usually didn’t end at the bottom of the wave. We would continue into the face of the next wave, and a big “greenie” would come barreling down the deck at about 40 MPH. We all hit the floor and looked for fish as the wave passed over. We probably did that fifty or sixty times. One of the late arrivals at the finish line was my hero, Odell Lewis, who was piloting a 22’ Mike Navalany S-22 boat with a black motor of some sort. I think he was the first outboard, and he had a rider bouncing around the floor who was much the worse for wear. Aronow and I jumped down to Odell’s boat, and helped get the barely conscious rider up to the dock, and medical help. Odell said “I put my foot on him every time he bounced by…..” We won the leg back, and the overall victory. Next race was Around Long Island. I drove the 28’ Donzi “Little Broad Jumper”, Bill drove the big one, and Aronow drove the BBD. Aronow and I had identical Holman Moody Fords, but his boat was 1800 pounds heavier that mine. I carried my Long Island Donzi dealer, Bobby Weichbrodt, and the President of Bertram Yacht, Peter Rittmaster, as crew. We built up a big lead down the Atlantic, and then cruised Long Island Sound until Aronow caught up with us. We made a circle around him, just to show him where he stood. He motioned for me to slow down to his speed, and that we would finish bow to bow, with me slightly ahead for PR. Bobby Rautbord was running third, so it would be our first Donzi 1-2-3 finish. Don kept slowing bit by bit, but Peter noticed the ploy and alerted me. We beat him by about 10 feet.

This article was originally posted on Powerboatnation.com.