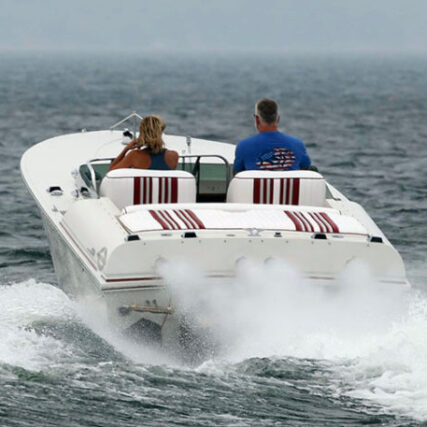 Magnum Marine has built, and continues to build, some of the world’s finest craft yet there is something special about seeing a restoration bring an old beauty back to life. Chip Miller of St. Clair Shores Michigan purchased a dormant 1981 Magnum 27 Starfire vessel with the intention of restoring it to all of her original glory. Restoration is no easy process, but it’s a labor of love, learn all about this 1981 Magnum 27 Starfire Restoration below!

Among Miller’s most recent acquisitions is a gem of 1981 Magnum 27 Starfire sport boat originally powered by twin 280-hp MerCruiser 350 engines with TRS drives. He purchased the boat and began restoring it last summer.

“I bought from an owner who had it since the mid-1980s,” he said. “He had it in our rack storage and then moved it to a storage building in Detroit. Like anything stored for 20 years, it had dry rot on the hoses and interior. It ran, but all three fuel tanks had to be flushed. But the gelcoat was in good shape.”

“We ran it toward the end of last summer and had an oil pressure problem and hurt a crankshaft,” he continued. “Come to find out, there was rust inside the engines. We tore apart the bad motor and found the crankshaft was wasted.”

Rather than try to rebuild the Magnum’s 30-year-old powerplants, Miller tasked noted offshore racing engine builder, Frank McComas, to build a new set of new 400-cubic-inch, electronically fueled-injected mills for the boat. The new engines produce 380 hp and 500 foot-pounds of torque a piece, which made rebuilding the TRS drives particularly essential. So that’s what Miller and McComas did.