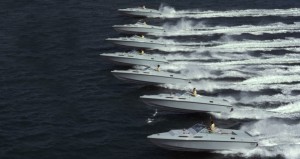 Fleet of Magnum 27 Patrol boats for the Kuwait Coast Guard

Looking Back… After the US Customs Services ordered a pair of Magnum 27’s, another major breakthrough followed.

After seeing the success of the Magnum 27’s used by the Dade County Police, US Customs Service, and US Coast Guard, the  Kuwait Coast Guard ordered a fleet of twenty patrol boats, all based on the Magnum 27 hull.

This order came after the ruling family in Kuwait had purchased Magnums as part of their fleet of leisure boats, which confirms that they were very impressed with the performance. It is believed that these patrol boats are still in service.