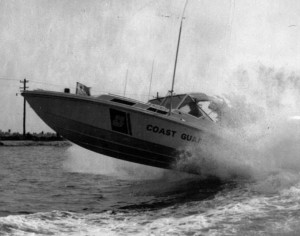 After the US Customs Service ordered Magnum 27’s to use as patrol boats in 1978, they came back onto the scene in 1985, when they ordered two patrol boats based on the Magnum 38 hull. These were the first patrol boats that Magnum had built that featured enclosed pilothouses to give the crews some weather protection.

One was powered by a pair of Mercruiser 400 hp gasoline engines and the other had diesel power supplied by Caterpillar. Once again, the Customs were full of praise. “I have received very favorable reports from our Fort Pierce office on its handling characteristics and strong construction,” writes the official. “They are utilizing the vessel upwards of twelve hours a day on patrol and surveillance activities and find it exceptional when conducting law enforcement stops and boardings.”