Yachting in February: the Best 8 Places to Visit 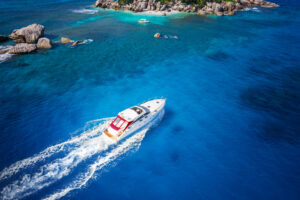 Yachting in February can be tricky as unpredictable weather approaches. While some local climates may be undesirable, February is a perfect time to take your yacht abroad. Continue reading below to discover the best eight places to visit this season.

Yachting In February: The Best 8 Places to Visit
The best destinations to go yachting in February vary with temperature and crowds depending on where you would like to go on your yacht. February is a great month to go yachting in Caribbean destinations as the weather is warm and the crowds of the high season have departed with the areas quieting down. The Indian Ocean is also a great place to go in February as the winds have stabilized.

Depending on where you decide to take a trip too, February still has superb weather in the Caribbean and further afield the weather is favorable for yachting. The water temperatures are still ideal for swimming when you go yachting in February.

1. Tenerife
Tenerife is one of the best places to go yachting in February due to its abundance of things to do and see. Tenerife is the largest of the seven Canary Islands and is one of the most popular islands. Tenerife is a volcanic island with endless mountain ranges all over the island. Each year millions of tourists descend on the island for holidays, in addition, to yachting and exploring what the island has to offer.

Tenerife is often referred to as the ‘island of eternal spring’, which makes it one of the best places to go yachting in February. The island and the surrounding islands have a warm tropical climate with an average February temperature of between 20c (68f) and 12c (54f). The islands often displays challenging strong winds, particularly between the islands which act as a kind of funnel. Winds vary from force 3 to 4 in a northeast direction.

2. Cape Verde
Located off the west coast of Africa in the Atlantic Ocean, Cape Verde is made up of 10 islands, some of which are uninhabited. Each island is unique and offers beautiful beaches, crystal clear waters, and great spots for snorkeling or diving. All the islands are volcanic making for beautiful landscapes, hiking destinations, and luscious green valleys. Some great places to visit are the islands of Sal, Maio, Santiago, and Boavista.

3. Belize
Belize is located in the Caribbean and is a small country in Central America, south of Mexico and neighboring Guatemala. Belize is home to the second-largest coral reef in the world named Mesoamerican Reef, which runs 350NM from Yucatan Peninsula (Mexico) down the coast of Belize. This is the perfect location for snorkeling with over 50 species of corals, 500 species of tropical fish, whale sharks, and seabirds.

4. Antigua
Located in the middle of the Leeward Islands, Antigua is a luxury Caribbean yacht destination with natural beauty, a vibrant live music culture, and water which boasts thousands of shades of blue. This quiet paradise has over 54 miles of coastline to enjoy, with over 365 beaches, all with white sand and natural beauty. Antigua not only has beautiful beaches there are ample opportunities and places to snorkel in the coral reefs (if you’re lucky you may even spot a Hawksbill sea turtle), take a hike up to Fort Barrington, and you can even zip line through the rainforests.

Antigua is a great place to go yachting in February with short passages, clear blue waters, and line-of-sight navigation. In February, the average daily high temperature is 29c (84f) and the average low is 22c (72f). During February, the winds are predominately blowing from an easterly direction at around 12 knots.

5. BVI
The BVI is a great winter sun yachting destination. February is a great time to take a yacht in the BVI as high season is predominately over, with fewer people visiting the islands. The BVI is one of the best places to go yachting in February.

The BVI’s weather makes it one of the best places to go yachting in February. The average high for the month is 83f (28c) and the average low is 75f (24c), although rainfall can occur it is rare at this time of year. The wind tends to be stable between 15 – 25 knots in an easterly direction, which varies from a southeast direction in the summer months.

The peak yachting time in the BVI is between December and April, with private boats venturing from the Mediterranean across the ocean, bring more boats and tourists to the area. In February the majority of these boats have arrived from the Mediterranean in past months for the high season, which means the BVI is a lot quieter. This means it is easier to find moorings in marinas or uncrowded bays for anchorages.

6. St Lucia
St Lucia is one of the best places to go yachting in February with Spanish, French, and British influences, St. Lucia has a beautiful blend of cultures. This means that in St. Lucia you’ll find cricket tournaments, Caribbean-style curry dishes, as well as Calypso, Socal, Reggae, Compas, Zouk, and Salsa music. With a deep and interesting history, there’s no shortage of beautiful island traditions in which you can partake. Here you’ll enjoy amazing hiking trails, luxurious boutique resorts, exhilarating adventure activities, and delectable seafood.

St Lucia is a great place to go yachting in February with an average temperature of between 28c (82f) and 24c (76f). The wind conditions in February range from 10 to 25 knots in an easterly direction, with very little rain. On a St Lucia yachting itinerary, there are long periods of yachting making it a great experience for seasoned yachters or those new to the world of yachting.

7. Seychelles
Proclaimed “the most beautiful islands on Earth”, Seychelles takes you to an entirely different unique world. Immerse yourself in nature and take in the special landscape of this archipelago. Home to 275 species of birds, 2,200 giant Aldabra tortoises, and many endemic species, Seychelles claims a unique ecosystem. Located 1,000 miles off the east coast of Africa in the Indian Ocean, Seychelles is a collection of 115 islands, many of which are coral islands.

When yachting in February in Seychelles the average high is 84f (29c) and an average low of 75f (24c) during the month. The winds blow frequently in a northeasterly direction at approximately 10 knots and there is a tidal system that varies by 4.5ft or 5.9ft (1.4m or 1.8m). When yachting in February in Seychelles tropical forests are abundant, white-sandy beaches, and coral reefs to explore throughout the islands.

8. Grenada
Grenada is the ideal location to go yachting in February, with an average temperature between 28c (82f) and 24c (76f). In February winds have stabilized and settled in a northeasterly direction ranging from 10 – 25 knots. February is the second month of the dry season which runs until May, so rain is less likely during this month.

With beautiful mountains, unique fauna and flora, lakes, and an abundance of wildlife, Grenada has something for everyone. In addition to its deep colonial history, Grenada is an island of volcanic origin. This gives it a wonderfully interesting landscape of rocky coastline and beaches set against bright green foliage and rich vegetation. Coupled with the amazing scenery, the island is home to armadillos, mona monkeys, and mockingbirds. The marine life is also present in abundance, Grenada’s waters are full of colorful coral reefs, seagrass beds – making it ideal for snorkeling and yachting in February.