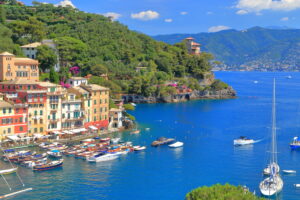 Yachting in April is a must-do. As warm, spring weather arrives, April is the perfect time to visit your dream destination. Continue reading below to discover the best nine places to visit by yacht in April.

Some of the best destinations to go yachting in April are Croatia, Greece, Amalfi Coast, Ibiza, Seychelles, BVI, Bahamas and other Caribbean destinations. April is a great time to go yachting as conditions are favorable, prices are often cheaper out of the high season for stays and flights. In April you can often find a last-minute or bargain trip with fewer people opting to go yachting in April. Depending on where you decide to take a yachting trip too, April still has superb weather in the Caribbean and further afield the weather is favorable for yachting. With the Mediterranean season just beginning and the weather warming up. The water temperatures are still ideal for swimming when you go yachting in April.

1. Greece
Greece is one of the most popular destinations to go yachting in April with less crowded islands and marinas, as well as favorable conditions with small towns still open for business but less crowded.

The weather when yachting in April in Greece is great with the average high for the month being 68f (20c) and the average low being 50f (10c). This weather is a lot cooler than July and August when it is often too hot to walk around and explore the villages, hike or participate in strenuous activities on the islands or mainland.

Greece has over 6,000 islands, many of which are both inhabited and uninhabited. The islands are split into main areas and groups, which each have their own individual climates, winds, and sea conditions. These collections are the Dodecanese, Ionian, Saronic, Sporades, Aegean Islands, the Cyclades, and Cretan islands.

2. Turkey
The Turkish Riviera is a 1,000 mile stretch of coastline, with green mountains, crystal clear waters, historic sites, and superb beaches, making it a great place to go yachting in April. From diving in Antalya, the archaeological site of Ephesus, the vibrant city of Fethiye, Ölüdeniz lagoon, the medieval castle, and underwater museum in Bodrum.

Turkey is a great place to go yachting in April, thanks to its warm but cooler weather with an average temperature of 70f (21c), during this time each day has an average of 11 hours of daylight. The yachting conditions in Turkey in April are an average of 5 knots.

3. Amalfi Coast
The Amalfi Coast and its surrounding islands are popular yachting destinations in April with comfortable temperatures, uncrowded sites and beautiful sunny days. The average temperature is a high of 66f (19c). During April the yachting conditions are slightly calmer than other locations with winds reaching 6 knots.

The Amalfi Coast has lots of places to visit and things to see, making it a popular destination to go yachting in April, as the landmark places, are uncrowded and many offer low season prices.

Italy can become busy in the summer months, especially on the Amalfi Coast, which means everything from restaurants, anchorages, and marinas are quieter than in July or August. The towns of Positano, Sorrento, and Praiano are often crowded in the summer but April offers a break from the crowds.

5. Bahamas
The Bahamas is one of the best places to go yachting in April with an average high of 81f (27c) and an average low of 69f (21c). The water stays at a comfortable 79f (26c) and wind conditions stabilize, gentle, trade winds of between 5 -20 knots, which are usually blowing from the east.

200 km of island paradise; Gentle winds and easy yachting conditions allow guests to enjoy some of the finest scuba-diving spots in the world, and navigation is very straightforward, mainly line of sight.

6. BVI
A great spring sun yachting destination. April is a great time to take a yacht to the BVI as there are fewer people visiting the islands, it is a little busier than other times due to America’s spring break season but it shouldn’t be as crowded as in the winter season. The BVI is one of the best places to go yachting in April.

The BVI’s weather makes it one of the best places to go yachting in April. The average high for the month is 84f (29c) and the average low is 77f (25c), although rainfall can occur it is rare at this time of year. The wind tends to be stable between 15 – 25 knots in an easterly direction, which varies from a southeast direction in the summer months.

The peak yachting time in the BVI is between December and April, with private boats venturing from the Mediterranean across the ocean, bring more boats and tourists to the area.

By April many of these boats have had their high season with a small number being busy for spring break. But it is not as crowded as during the winter months. Spring is a great time to go yachting in the BVI with regattas and yachting races happening and consistent winds.

While the weather temperature increases the sea temperature sea averages 14c (57f) through April. Croatia has an average of 10 hours of daylight throughout April, meaning plenty of hours of sunshine and daylight to undertake activities and yacht around different places.

In April yachting in Croatia will give you the opportunity to experience everything Croatia has to offer, in terms of tourist attractions, restaurants, and national parks, without all the tourists they receive in the summer.

Marinas also tend to be quieter, which allows for easy access for mooring without a large number of boats looking to dock at the same port, as the summer season is just beginning.

8. Seychelles
Proclaimed “some of the most beautiful islands on Earth”, Seychelles take you to an entirely different unique world. Immerse yourself in nature and take in the special and beautiful landscape of this archipelago.

Home to 275 species of birds, 2,200 giant Aldabra tortoises, and many endemic species, Seychelles claims a unique ecosystem. Located 1,000 miles off the east coast of Africa in the Indian Ocean, Seychelles is a collection of 115 islands, many of which are coral islands.

When yachting in April in Seychelles the average high is 86f (30c) and an average low of 77f (25c) during the month. The winds blow frequently in a northeasterly direction at approximately 3 knots and there is a tidal system that varies by 4.5ft or 5.9ft (1.4m or 1.8m).

9. Grenada
Grenada is the ideal location to visit and to go yachting in April, with an average temperature between 31c (88f) and 24c (76f). In April winds have stabilized and settled in a northeasterly direction ranging from 10 – 25 knots. April is the last month of the dry season which runs until May, so rain is less likely during April.

With beautiful mountains, unique fauna and flora, lakes, and an abundance of wildlife, Grenada has something for everyone. In addition to its deep colonial history, Grenada is an island of volcanic origin. This gives it a wonderfully interesting landscape of rocky coastline and beaches set against bright green foliage and rich vegetation.

Coupled with the amazing scenery, the island is home to armadillos, mona monkeys, and mockingbirds. The marine life is also present in abundance, Grenada’s waters are full of colorful coral reefs, seagrass beds – making it ideal for snorkeling and yachting in April.