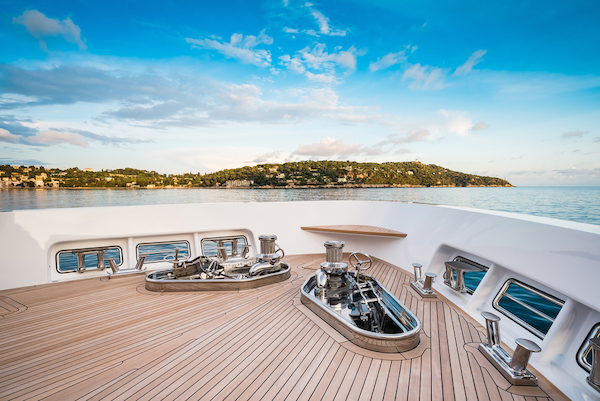 Taking care of the planet is primary. When it comes to Superyachts, materials like Teak Wood have been deforested and over-demanded to the point of a shortage. The following article describes alternative ways Superyachts can be made without leaving a harmful footprint on the planet’s forests.

Teak may soon become a thing of the past in Superyacht construction due to sustainability issues and the growing pressure for yachts to become more socially responsible.

When talking about new build yachts, immaculate teak decks often come to mind. However, this long-used material may soon become a thing of the past in superyacht construction due to sustainability issues and the growing pressure for yachts to become more socially responsible.

It is increasingly clear that we cannot maintain our ecosystem at its current pace unless more responsible choices are made, and each individual must be accountable for protecting our natural resources and the planet. According to the WWF, in the time it takes to say the word “deforestation”, a section of forest the size of a football pitch is cut down. That’s every two seconds, every single day. As the overall impact of global deforestation is increasingly understood and accepted, governments are beginning to respond accordingly and implementing stricter regulations across all industries.

Most teak trees grow naturally in southern Asia, and the wood primarily comes from Thailand, Indonesia, and Myanmar. According to a study by the University of Leeds, “Forest clearance in Southeast Asia is accelerating, leading to unprecedented increases in carbon emission. As a result, more than 400 million tonnes of carbon are released into the atmosphere every year as forests are cleared in the region, with that emissions figure increasing in recent years.”

Myanmar is estimated to be the largest country boasting teak trees as a natural resource, currently holding approximately half of the world’s known supply of teak wood. Due to unregulated and sometimes unlawful logging practices, as well as recent political issues, the European Union has imposed restrictive measures on individuals and businesses in Myanmar. This includes MTE, the state-owned business that has exclusive rights over timber production. Since 2017, the European Union Timber Regulation (EUTR) has not permitted the provision of Myanmar timber to the EU market, making imports of this teak a violation of the law.

This combination of ecological and political factors has resulted in a reduced supply of teak and record high market prices, leading to several attempts to circumvent trade sanctions and import the product into the European Union with varied success. In one such case, the Environmental Investigation Agency (EIA) is investigating a Dutch company for importing illicit teak from Myanmar via the Czech Republic. This is not an isolated case and simply illustrates how desperate the market has become.

On most yachts, teak wood has been and remains the traditional choice for decks. However, those who truly know the market understand where the trends are heading; supply is rapidly decreasing, and prices will continue to rise. There are several alternatives to teak on the market today which are more ecologically friendly, look great and perform just as well. As environmental regulations increase and substitute products become more acceptable in the industry, the demand for teak will likely fade.

Cork has become one of the top substitutes for teak decking. Combined with a polyurethane, the result is a high-density product that is flexible and absorbs impact. The cork deck will also age in the sun similarly to teak, meaning it will slowly turn from a light brown to a light grey colour. It can then be sanded back, regaining its original light brown colour.

PVC is also an option to replace natural teak wood. The PVC decking is composed of a combination of soft and hard fibres that are stain and water resistant and is available in a variety of colour variations that can be sanded when necessary.

A third option is TESUMO – a product created as a three-way joint venture between yacht decking company WolzNautic, a Bremen-based shipyard and a leading German university. The team began exploring this topic over eight years ago in search of a fast-growing tree that could be a substitute for teak. The result of their search is a wood that is heat treated and combined with a water-based, non-toxic resin – the final product provides the look and feel of teak, is available in non-standard lengths and was developed with the demanding marine environment in mind. According to study results, the product has almost identical properties to teak, without the ecological footprint. Once the TESUMO decking has reached the end of its use, the product will break down naturally in the same way as any other non-treated wood product.