Waterside Pubs, Breweries and Distilleries to Yacht to in the UK and Ireland 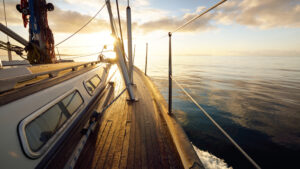 Is there any better way to end the day on the water than by gathering over dinner and drinks? Continue reading to see recommended waterside pubs to try in the UK and Ireland.

For many, stepping ashore for a pint or a glass of wine is the ideal end to a great day’s yachting; the chance to share the highlights of your passage, chew over what you could have done better or just enjoy the view. Hostelries have long been part of yachting tradition, from the quayside pub, which welcomes weather-beaten yachters to prop up the bar in their flotsam covered establishments, to the quaint, rural, riverside haunts, with their beer gardens offering unrivalled views over the anchorage.

There’s a great wealth of local real ales, wines and spirits to discover in ports and anchorages all around our coast. From the peaty single malts of Islay or the malty sweetness and hoppy bitterness of Irish Guinness to the delicate botanicals of Portsmouth gin and the crisp real ales of Purbeck, there are plenty of ways to celebrate another memory-making yacht.

The west Scottish island of Islay is currently home to nine open distilleries (and there are plans to reopen Port Ellen and one more). While it’s possible to moor at Port Ellen Marina, there are two moorings provided by Lagavulin Distillery in the sheltered Lagavulin Bay. This puts you a stone’s throw from Lagavulin Distillery and a short walk from both Ardbeg to the east and Laphroaig to the west. All three distilleries offer tastings and tours. But as you’re closest to Lagavulin it makes sense to start there, tours start at £20; tastings start at £25.

I can personally recommend the £35 Warehouse Demonstration, by the infinitely knowledgeable Iain MacArthur; after a distillery tour, you will be led into Lagvulin’s warehouse to sample the contents of many barrels and bottles. Oban distillery is another easily accessible distillery on the west coast for those less fond of the peaty Islay malts.

Once ranking third in a survey of the world’s top-ten beach bars, Porth Dinllaen’s Ty Coch Inn is situated on the north coast of the Lleyn peninsula where it enjoys spectacular views from its doorstep sandy beach across to the triple peaks of Yr Eifl and Snowdonia. Only locals have vehicle access to the inn, so visitors must walk across the beach from Morfa Nefyn or cross the headland golf course.

The 1823 Ty Coch started life as a vicarage before opening as an inn in 1842; it enjoys a central position among the two dozen or so buildings of this National Trust-owned village. The pub’s live music sessions are legendary, the food great, and the beer refreshing. One of my fondest memories is dining on a beach table in the sun with the incoming sea lapping at my bare toes watching the comings and goings of boating folk.

Most yachters bypass Dublin in favour of the marinas at Howth or Dun Laoghaire, choosing instead to visit the city on its Dart railway system. There is, however, a 100-berth marina on the south bank of the Liffey in Dublin at Poolbeg Yacht Club. Once in Dublin, there are the producers of its two world-famous drinks to visit.

St James’s Gate, Dublin is the home of Guinness. The Guinness experience isn’t a brewery tour, it’s the museum of Guinness and full of interesting facts and stories, finishing with a chance to pull your own pint. If whiskey is more your tipple, head north of the Liffey to Southfields and look for the observation tower that was an old Jameson Distillery chimney.

The Isles of Scilly are flung out into the Atlantic from Land’s End, and St Agnes is the farthest inhabited island in the group, which makes the Turks Head – celebrating its 50th year in 2022 – the southwesternmost pub in Britain. You have to work quite hard to get there and anchoring for any length of time is far from certain, which is partly why the welcome feels the warmest, the food the most delicious and the pint’s the best you’ve ever had.

But the Cornish beers and locally produced food are well deserving of this accolade. You might catch a gig race, or a local gig of a more musical kind, but sufficient is the voyager’s contentment as you relax into the sublime setting, nestled on the edge of the turquoise waters of Porth Conger, and raise your glass to the boat that brought you here and the crew who shared the journey.