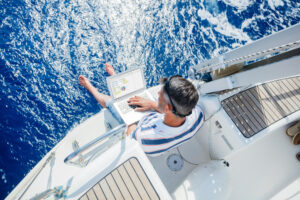 Current trends in superyacht technology are continuously advancing. With more people working at sea due to the pandemic, and the increasing need for technology as time goes on, IT support, cybersecurity, and connectivity on your superyacht has never been easier. There is now easier access to streaming services as well as smartphone apps to help add comfort to your next yachting excursion. Continue reading below to learn more!

Despite the omnipresence of today’s smartphones and gadgets, yachts have struggled to keep up with tech developments onshore. But that’s changing – and fast, as Risa Merl discovers the latest technology trends in the world of superyacht design

When it comes to technology, we’ve never had it so good. From an ever-increasing range of gadgets and gizmos to the latest advances in connectivity, there’s more choice, and more exciting developments on the horizon than ever before – and that goes for the superyacht world, too. Owners want the same services – if not better – that they can access on land, and a handful of specialist firms are doing their best to meet consumer-driven demand on board. Yet, whether owners appreciate it or not, yachts have their own challenges when it comes to keeping up with tech’s constant progress. The middle of the ocean is one of the hardest – and most expensive – places to ensure fast and reliable broadband. And the three-year build time of a custom yacht is a challenge for suppliers and designers who need to think ahead and include the latest tech by the time the yacht is launched. Nonetheless, tech companies are rising to the challenge with an abundance of products to enhance onboard entertainment and security.

“Yacht guests want the same experience they have at home, so rock-solid and secure Wi-Fi is the first priority,” explains Videoworks CTO Maurizio Minossi, “and bigger internet pipes will be available within the next two years in order to allow 5G and new-generation VSAT [very small aperture terminal – a compact, two-way satellite antenna].” Super-fast connectivity is leading the charge, then, but there are plenty more developments in the pipeline too…

On-demand services such as Netflix and Amazon Prime have all heightened our expectations of how quickly we should get whatever we desire. We want it now, and that includes being able to watch the latest movies and television shows, wherever we are. Streaming services that work on land, however, haven’t always worked as efficiently on yachts, both in terms of reliable connectivity and price point, as Anil Thadani, owner of the world- roaming 45-metre Latitude reports. “The service I used before was horrible,” he says. “Connectivity was spotty, the speed was awful and it cost a lot more because they only gave us a limited amount – 30GB per month – for about $7,000 [£5,400], and if you exceeded that, the rates would be exorbitant.”
Thadani found a new service for Latitude that is working wonders. Switching over to Marine VSAT required a new satellite dome, which incurred upfront costs, but he says that the service has been so good that the initial pain was worth it. Now for a fixed cost of $5,000 per month he can stream Netflix in remote parts of Indonesia and watch CNN live on his iPad. He says the streaming isn’t always flawless, but overall it’s “good enough” and he hasn’t experienced any outages. For an extra $5,000 per month, Marine VSAT can guarantee flawless streaming and unlimited data. Meanwhile, London-based satellite communications company Inmarsat is set to launch seven new satellites into orbit by 2023, which will include extended ‘always-on’ coverage across the Arctic for those plotting a polar adventure.

For those who don’t want to rely on a data connection, Kaleidescape is also offering its new Marine Movie Service. Launched at the Monaco Yacht Show, it offers movie and music collections that arrive on a hard drive in a matter of days. One drive can hold up to 100 Blu-ray or 50 4K-quality movies, and customers (either a hands-on owner or a crew member) can have whichever titles they want pre-loaded on to it. The service also offers curated selections of new cinema releases, classic movies and kids’ favourites too. It’s not the breadth of choice, however, but the quality of what’s on offer that companies are focusing on. “Ten years ago, yacht owners and captains were more concerned with how to get enough content,” says Cheena Srinivasan, founder and CEO of Kaleidescape. “Now there’s an overabundance of content, and we are trying to solve that problem through curation. Think of this as a white-glove concierge service. We’re bringing convenience via an end-to-end system through working with our marine integrators, so the yacht owners don’t have to worry about anything.”

IT Support at Sea

Priva is another superyacht tech company that’s putting a focus on concierge services to reduce owner headaches – what good is expensive kit if it doesn’t work when you want to use it? Priva’s Technical Concierge is a 24/7 service that connects crew directly to expert audiovisual and technical support. Rather than getting passed around at a call centre, users will find that the first person to answer this hotline is a highly skilled technical expert, who will work with the captain or electronic technical officer to get the yacht’s tech back online and working right away. “We want yacht owners to get the most out of every minute they spend on board,” says Ole-Kristian Sivertsen, senior vice president of Global Eagle, the company behind Priva. “With Priva Technical Concierge, we measure success by the number of first-call resolutions – we want our experts who answer the calls to be as skilled as possible, and to know as much as they can about every single yacht that we support, so they can solve the problem for the client there and then.”

Of course, superyacht owners aren’t on board all the time, and charter yachts aren’t booked every week of the year, so onboard tech has to be scalable to suit their needs. “Flexibility is key when it comes to yacht connectivity,” says Peter Broadhurst, senior vice president at Inmarsat. Its latest generation of Global Xpress satellites were launched two years ago and allow for greater bandwidth. Inmarsat then tailored the service to the yachting industry with Fleet Xpress, which has since performed more than 10,000 installations. The service allows owners and managers to scale bandwidth up and down, depending on usage and the number of people on board at any one time, and even allows clients to suspend their service in the off-season (or in case a worldwide pandemic leaves you on one side of the world and your yacht on the other). “We’ve introduced a lot more flexibility into our plans,” Broadhurst explains, “the ability to upgrade and downgrade as and when you want, suspend the service, change the data rates and plans.” Inmarsat data plans start from just three months.

Adaptability is also key when it comes to a yacht’s build. “One of the biggest challenges during any yacht project is that technology keeps evolving, and you don’t want a new yacht with old tech,” says Casper Kleiman of Dutch company VBH, which creates audio, video and IT products for new-build yachts as well as refits. VBH confirms that in the past systems needed to be connected physically, which added to the challenge of designing a yacht that needed to be up to date at launch three years down the line. But this is now changing thanks to software-based connections. “By using a flexible software-based backbone, it’s easier to connect new hardware later in the build,” Kleiman says. “We’ve used this on a recent 87-metre yacht.”

Once installed, technology also has to work within multipurpose spaces, which are becoming increasingly popular on board. A helideck might host yoga in the morning, a round of TopGolf in the afternoon and a live music performance, nightclub or movie under the stars come nightfall – and it still needs to be able to allow a helicopter to land if required. “Providing multifunctional areas and spaces that evolve throughout the day, including the main saloon and beach club, requires technology that can adapt from one experience or functionality to another,” says Alistair Levine, director of sales and marketing at California Audio Technology.

“This type of flexibility harnesses everything from video walls and audio systems to lighting control and motorised shades, so that you can manipulate the visual and auditory experience to suit your needs – but this level of functionality needs to be discussed at the design stage.”

In recent years we’ve become attached – some might argue addicted – to our smartphones, so it’s no surprise that we now want and expect them to control our onboard tech. As yacht automation streamlines into a “smart yacht” experience, clients and crew want to be able to control all the onboard systems from one easy-to-use location. Videoworks currently offers just this, integrating all of the yacht’s domotics and onboard systems into a single device. Instead of the popular Crestron remote control, owners might opt for a dedicated multi-service app that allows them to manage all of their systems from a smartphone. ItwModeX is an iOS app (a web version can be installed on Android) designed by Itworks exclusively for Videoworks, which can be customised with content and graphics to suit each yacht. “Multi-service apps can seamlessly integrate with the usual tools guests are familiar with, such as Kaleidescape,” says Minossi. “We use them in most of our projects.”

Yacht brokerage houses are also thinking more about mobile devices, as proven by the new Burgess app which allows users access to its services whether on or offline. “We want to allow our clients and potential customers access to Burgess yachts and content via whichever channel they prefer,” says Tim Davis, chief marketing officer at Burgess. “Our research shows that our target audience favours mobile devices [over laptops or desktop computers] to access our digital services. We have seen a good proportion of new prospects registering with Burgess via the app, as well as existing customers. Take-up has been encouraging – and we are planning an Android version.”

Superyachts can have all the latest kit, then. Yet while advances in audiovisual technology are impressive, having sufficient cybersecurity to keep onboard internet connections safe hasn’t become standard practice. “Research showed us that 64 per cent of superyachts rely on simple firewalls or crew-based solutions to protect against cyber risks – and 76 per cent don’t have anyone on board to look after cybersecurity,” says Rob Myers, senior director at Inmarsat. The company now offers its Fleet Secure End Point service to address this problem. It is designed to prevent cyberattacks, detect vulnerabilities and respond to threats – and the bandwidth used doesn’t come out of the yacht owner’s monthly allowance. “It’s a pragmatic approach to security,” says Broadhurst.

At the Marine Equipment Trade Show in Amsterdam, Videoworks introduced Cisco ASA 55066, a new dedicated onboard cybersecurity device. “Cisco ASA is a state-of-the-art cybersecurity product,” claims Minossi. The network security device incorporates threat- defence software, which allows for real-time identification and prevention of viruses and threats from the web. Several levels of security are permitted via a single platform, and it can also look at all network activity to see vulnerabilities in any apps or files, with an automated system assessing potential threats.