Richard Bertram’s offshore 1960 Miami-Nassau race was a success because of the thirty-one foot wooden Moppie. 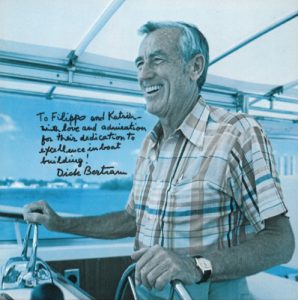 Magnum Marine’s offshore racing traces back years of prosperity, read more below about Richard Bertram and the 1960 Miami-Nassau race.

To trace the roots of Magnum’s racing success, one needs to go back to another famous name in the yachting world: Richard Bertram, who, after graduating from Princeton, moved to Miami to start a yacht brokerage firm and a boating career as a competitive sailor. In 1958 Bertram discovered one of the cornerstones of modern powerboat design—the deep-V hull. That summer he was involved in the America’s Cup in Newport, Rhode Island. On a particularly rough day, with six-foot seas and twenty-knot winds, Bertram saw a powerboat knifing through the confused surf at nearly thirty knots. The boat was the tender for Easterner, one of the Cup contenders.

“This little twenty-three-foot tender stopped every sailor in the fleet in his tracks,” said Bertram. “No one had ever seen a powerboat performance approach it.”

Both Easterner and her twenty-three-foot tender were designed by C. Raymond Hunt, a self-taught boat designer and competitive sailor from Boston. Bertram immediately saw the potential of this new deep-V hull designed by Hunt and commissioned Hunt to design a thirty-one foot deep-V hull with the same 24 degree dead rise, hard chines, and running strakes that he had seen that summer in Newport. Bertram had the boat built in wood in Miami and Moppie, as she was called after his wife, was launched in 1959.

Bertram and his partner Sam Griffith ran the first sea trials together. “Sam started smiling and eased forward on the throttles,” recalled Bertram, “Moppie was incredibly soft at speeds that would have been impossible with a conventional hull. We put her through every test in the book.” 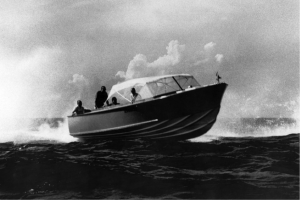 The ultimate test was the 1960 Miami-Nassau race, which was held in extremely rough conditions. The thirty-one-foot wooden Moppie, surrounded by a fleet of experimental fiberglass boats, quickly established the lead and stayed out in front, charging through the worst conditions of the five-year event to reach Nassau first and beating the previous record holder by four minutes. Bertram’s deep-V transformed powerboat racing.

“There were so many yachtsmen waving checkbooks at me that I had to go into business,” Bertram told the boating editor of the Miami Herald. Within months of being founded, Bertram Yachts marked the launch of the 100th boat off its production line… a fiberglass Moppie, with a deep-V hull.

The following year, in 1961, Bertram and Griffith won the Miami-Nassau race in a fiberglass version of the original boat. Bertram became the most famous name in powerboat racing.