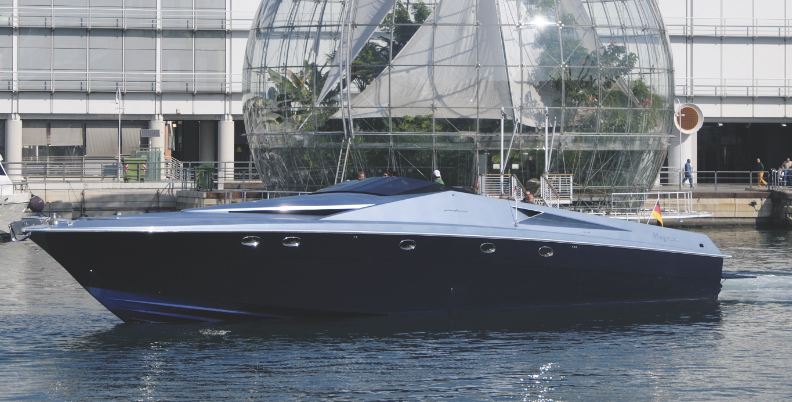 Top Yacht Design is published quarterly, produced by Panama Editore. Panama Editore has been involved in the nautical world since 1974. It currently publishes Il Giornale della Vela, Italy’s leading sailing magazine which celebrates its 40th anniversary this year. Top Yacht Design recently featured an article about Magnum Marine! Check it out, below.

I thought a lot about the right title for this article until I came to the conclusion that there is no narrative device that could suitably introduce the product that I am about to describe: Magnum presents itself. And it does so with great style, with the graceful boldness of those who do not fear comparisons, with a model that, unlike in the past, is able to challenge other competitors in its category of large high-performance yachts with undeniable success. With its 80 feet, in fact, the model officially presented at recent world famous boat shows, offers unique navigation features that once again confirm the incredible qualities of Magnum Marine creations. 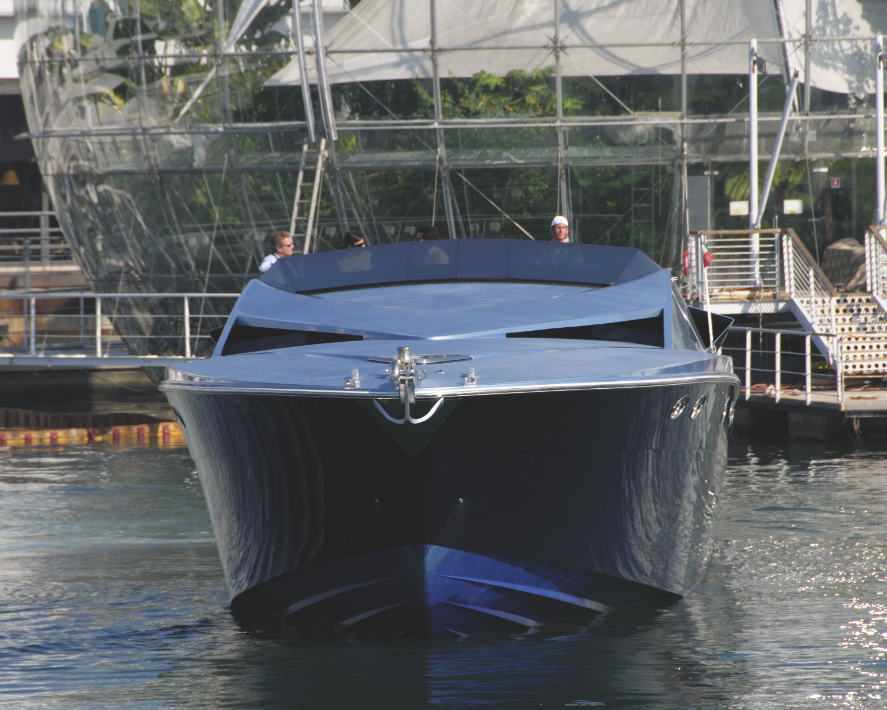 All merit due, without doubt, to the skilful hand of the designer Pininfarina, capable of designing a model with captivating shapes and unmistakable appeal. The hull on the Magnum 80′ has a deep V that cuts through the water with incredible ease, ensuring singular stability; high and aggressive on the surface of the sea, it has a style that recalls the grandeur of a bomber. It is hard to believe that it can dart through the waves with the lightness of a sea creature! Designed to move fast, handle storms well and deal easily with even the most hostile of seas, the Magnum is a perfect balance of performance and safety. It is no coincidence that the American boatyard was chosen by the United States government, foreign governments and important international clients as a reconnaissance rather than pleasure craft: a confirmation of its highest-level construction standards. With the exception of the structure, everything on board the Magnum 80′, as the boatyard’s tradition requires, revolves around the needs of its owner: from the color of the hull, to the internal layout, to the equipment and power of the installed engines.The model that I visited at the Festival de la Plaisance in Cannes and later at the Boat show in Genoa (during the sea trials) was minimalist in style, with sober, essential interiors mainly in teak and just two cabins each with bathroom for the owner and a couple of guests. It is completed by an open-space living area made up of a dinette and kitchen unit as well as the crew’s quarters at bow with relative bathroom. The generous size of the interior allows it to house more cabins and one can choose from a vast range of fittings and materials, to create varied stylistic versions of the large, versatile space.

On deck, there is plenty of space set aside for outdoor living, complete with furnishings, two tables surrounded by chairs and a magnificent sunbathing area at stern. Clean cut, decisive lines and a rational, geometric design throughout highlight the fact that this American boatyard’s treasures do not call for unnecessary “frivolities”. The quality is intrinsic, almost “inbred”. It is imprinted by the mould itself right from the outset of construction. This is the added value of Magnum production: certain qualities either exist or do not. High quality models followed, that can be forgiven for imperfections or defects in fitting that were clearly visible to many on the displayed model. However, there is a solution to this! The same cannot be said about lack of substance, something that is not lacking in Magnum. This cannot be judged by one simple visit, but uncovered over time on board the craft. No sooner said than done. Following Cannes, I went straight to Genoa with our untiring Editor where the Magnum 80′ was waiting for us to run a sea trial. 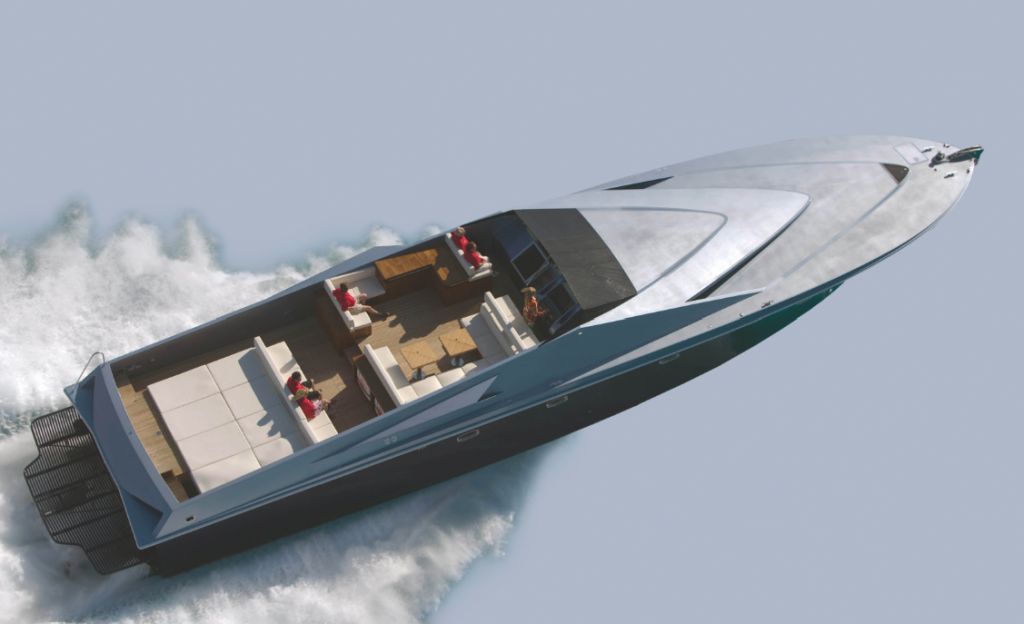 Friday, 10 October, 11.00am; a magnificent day, brightened up by a very warm sun that brings back summer mornings; for once the weather conditions are reliable! The sea is calm, possibly a little too calm, but I am not complaining as I am about to climb on board a very fast cannon ball and I am seven months pregnant with twins. Just “to want for nothing”, after all. However, this adventure does not worry me: the seaworthiness of the Magnum models are now well known to everyone. All I need to do is try it out in person to bring due credibility to my writing. My qualifications for this are undoubtedly perfect!

Jokes aside, we are all set to leave. We warm up the engines along the port stretch that leads out into the open sea, once out the speed gradually increases. Just a few seconds before gliding, we watch in amazement the spectacular, very high spray of water created by the propellers that gradually disappears as the speed increases. I am sitting next to Alex, our Captain. I look at the bridge console: after just a few seconds of acceleration, the Gps registers 48 knots at a speed that I tally at 2500 revs. It’s almost impossible! The feeling is very different from that slightly nervous excitement that one experiences at high speed; I look at the other four guests and the relaxed look on their faces seems to confirm my feelings. The minutes pass and Alex gives me advanced warning of a manoeuvre to starboard; I am amazed to realise that from our position, sheltered behind a strong windscreen, we can talk without too much effort. With constant, yet decisive movements, he starts to turn the wheel and we start our manoeuvre; we are noticeably inclined by about 35 degrees (this is the perception from where I am) and the boat starts to glide along on its right side like the best of skiers on a pair of carvings: fast and precise. We are stable and composed not a jolt or uncertainty. The Captain has diligently reduced the number of engine revs and the boat is now navigating at a speed of 35 knots. The manoeuvre is complete; the wake bears witness to our passage: it is round, almost perfect and, after a short word with the others, we unanimously agree that it is no more than 40 metres in diameter. Alex again launches the boat at full speed. Despite the calm sea, in my condition I would feel even the tiniest vibration as often occurs during sea trials at high speed. However, the Magnum 80′ glides across the surface of the sea effortlessly, causing no friction, with the ease of one who has experience to spare and the familiarity of something that is part of the water. We are ready for a second manoeuvre, this time on the opposite side: neat, perfect, clean like the line of a compass. It is a pleasure to sail on this boat. Powered by two MTU 2400 HP engines, activated by Arneson surface transmissions, the yacht reaches a speed touching on 60 knots; but it is possible to install smaller engines, depending on the client’s wishes. The trip continues; we are trying to make the most of the waves from other yachts, to test the hull as fully as possible. However, there is nothing to add that does not confirm what we have already said. The only reason that we are still at sea is the pleasure of sailing; no one wants to go back but time is running out and duty calls. We return to port satisfied, relaxed and having enjoyed ourselves. We take away with us the memory of an almost perfect trial, the pleasure of a trip at sea, the experience on board the unique Magnum 80′ and messy hair!

This article originally posted on Top-YachtDesign.com