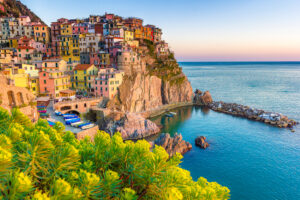 Italy is home to some of the most beautiful boating destinations in the world! Below are the top 10 boating locations in Italy. Due to COVID-19, we encourage you to verify if your preferred destinations are open and accepting visitors. Read below to find out more!

With its endless coast and splendorous sunny and mild Mediterranean climate, Italy is a paradise for pleasure boating.  Italy’s archipelagos, coastline, and lakes are an attraction not only for isolation from bustling Italian cities and crowded mainland beaches, but they encompass that quintessential glamour unique to Italian heliocentric life.

There is no place more famous for chic living than the island escapes of Capri, Ischia, and Procida. This trio of islands is easily accessible from the Gulf of Naples.  The island of Capri has been a retreat for an assortment of famous figures for more than 2,000 years, from Emperor Tiberius to poet-diplomat Pablo Neruda. It is most notable for its sea grottoes and exotic architecture that form a backdrop for the jet-set. Ischia is the largest island of the archipelago and is also referred to as a “green island” for its fertile blossoming landscape. Ischia is also renowned for its mineral springs and thermal baths that gush on the water’s edge. Known as Europe’s capital of thermal bath culture Ischia has dozens of basins and hundreds of springs and geysers operating to meet the various therapeutic needs of visitors.  Procida is the smallest island and as an unspoiled fisherman village, it is ideal for visitors seeking to escape the tourist bustle.

Colorful houses on cliffs and lemon trees form the backdrop along the Amalfi Coast. The coastline is easily accessible from the larger ports of Naples and Salerno, and marina facilities are available at some of the small towns along the coast such as Sorrento. Sailing in this area is a gateway to the bustling summer towns that dangle over the sea. While in the area, try not to miss the Ravello Festival, one of Italy’s most renowned historic summer music and arts festivals.  In Positano, where boats can idle in good weather, make sure to have a fresh seafood meal at Da Adolfo, accessible only by boat from Positano’s beach.

After working hard to take in all the sites and centuries of Rome, the Pontine Islands are the perfect place to relax. This archipelago of 6 islands is easily accessible from the port of Anzio, only 60 km from Rome. The largest island, Ponza, has a similar jet-set vibe to that of the island of Capri. It is famous for its natural swimming pools created from wind and sea erosion. While in Ponza be sure to take in a sunset at La Caletta and be seen at Frontone Village, one of the island’s most popular beach bars which are only accessible by boat. While the other islands in the area are uninhabited, around the island of Palmarola you will find seaside restaurants where boats can land to get to a handful of beaches and witness the island’s nature reserve.

While around the Maddalena archipelago between Corsica and Sardinia it is hard to remember you are not in the Caribbean. Comprising 7 main islands and numerous additional small islands, there are scores of coves and secluded bays to find shelter from the wind and dive into the crystal clear tepid water. With hundreds of long white sandy beaches around more than 60 islands, the area is a refreshing deviation from the crowded beaches of Italy’s mainland coast. For a change from the white on blue perfection omnipresent in the archipelago, visit Cala Spalmatore famous for its red granite rock formations.

The coastal resort town of Tuscany’s Porto Santo Stefano is an entryway to a mariner’s paradise. Made up of 7 main islands and hundreds of islets the Tuscan archipelago offers a fascinating combination of the crystal sea and unique geology formed from glaciation dating back to the Triassic period. The largest island of the archipelago, Elba, is notorious for being Napoleon Bonaparte’s place of exile. Elba offers excellent terrain for mountain biking and trekking, as well as beaches on its Ligurian and Tyrrenian shores. Another smaller mountainous island in the archipelago is Giglio, an island ripe with pine forests and vineyards. For some history visit the island of Montecristo, settled by the ancient Etruscans, Romans and Greeks and once part of the French Empire.

While Italy is famous for its surrounding blue seas, the country’s lake district is yet another celebrity attraction.  Lake Garda, thanks to its constant winds, is one of the most renowned locations for competitive sailing in Italy and hosts the country’s best regattas.  On the lake sailing schools and equipment for hire are available all year round. For a break from the sport, visit the Sirmione Spa with sulfurous waters flowing naturally from the lake at the luxury wellness center called Aquaria.

These 8 volcanic islands off the coast of Sicily offer the rare opportunity for witnessing steaming fumaroles and basking in the thermal waters. The islands are easily accessible from Palermo, including the island of Stromboli which is just the tip of an active underwater volcano.

The Gargano peninsula in the Puglia region has been voted the cleanest seawater in Italy. The fisherman village of Vieste, booming with nightlife and restaurants in the summer, is a gateway to the Tremiti Islands. The archipelago’s largest island is San Domino with calm waters for swimming and an array of grottoes.

The four main harbors along the Slovene Riviera are former Venetian settlements with picturesque old towns. The coastline’s most commercial port is Koper, located just 3 miles from the Italian border. The marina’s main attractions are the Praetorian Palace of Venetian Gothic origin located in the old town.

10. The Italian Riviera – Portofino and the Cinque Terre

The Italian Riviera stretches from the French border to the Cinque Terra. Its main port, Genoa, has one of the world’s most prestigious maritime histories and is the birthplace of Christopher Columbus. Genoa is also Italy’s largest seaport and a great starting point for charters to the small elegant fishing villages of Portofino and Camogli. One of the highlights in the area is the Cinque Terre, a 5-mile long seafront comprising 5 towns made up of terraced homes and gardens. Getting off the boat and hiking the winding path through the towns to find a quaint restaurant to taste pesto linguine is a must!