This Fourth of July, Magnum Celebrates our Rich American History 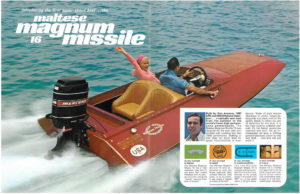 Power boating has been one of America’s favorite pastimes since our founder Don Aronow founded Formula Marine on 188th street in North Miami in 1963. Eventually founding the Donzi, Cigarette, and Magnum Marine companies, our very own founder led the way to create what is now a thriving and beloved passion for many who love spending their time on the water. According to USAToday, “[Aronow] was a tall, handsome playboy and a bon vivant. As the darling of the speedboat world, he ran with the glitterati and built boats for international figures, including the Shah of Iran and President George H. W. Bush. His racers won hundreds of offshore competitions, and Aronow himself was a two-time world champion.”

By the time he died in 1987, Aronow had brought joy to so many American families out on the water – and had designated Magnum Marine a top player in the American powerboat industry. He loved his boats, he loved America, and he loved the adrenaline of offshore performance racing.

As you spend time out on the water this Fourth of July, we invite you to think about the Americans who have made our passion for performance yachting a reality.