One year after Aronow founded Magnum Marine, he launched a 35’ race boat with a 12’ beam. A pleasure version with over 6 feet of headroom, head, galley, and space for sleeping six soon followed. Aronow called it the “penthouse on the water.” This was in fact the first time that high performance was combined with so much livability; Magnum Marine became more than just a race boat.

By 1968, with the 35’ and the 27’ Magnums in production, and the two new 16’ runabouts, the Magnum Missile and the Magnum Marauder (which were capable of reaching up to 70mph) just having been launched, Aronow sold Magnum Marine to a fellow racer and owner of the American Photocopy Corporation (APECO), Clayton Rautbord.

Clayton had owned a series of Magnums and was passionate about the brand. When he was offered the possibility to buy Magnum he jumped at the chance, with great enthusiasm and passion.

The 16’ runabouts were dropped from the range, which once again focused on the 27’ and the 35’. The Magnum 35 was offered in the open Sport version, the Hardtop and the Flybridge version for fishing. Fishing towers were also an option. With his business experience Clayton Rautbord developed the production aspect to make the factory more profitable. The hulls however remained the same: deep-V, reliable, and strong.

Even so, by 1970 Magnum began to feel the stiff competition from the Cary (Elton Cary was a former partner of Aronow’s) and from Cigarette Racing Team. Rautbord, who later sued Aronow under a non-compete clause, realized with some dread that Magnum’s founder had become his largest competitor. Magnum had remained a relatively small US factory, building boats almost exclusively for the US market. Magnum had to find a new clientele, perhaps even a new direction, or it could be in serious trouble. The brand’s savior turned out to be the Italian Marchese, Filippo Theodoli. Filippo had developed an early passion for the sea during his training at the Naval Academy, graduating shortly before the outbreak of World War II.

Filippo’s sailing in Porto Ercole turned from a sport into a business when Filippo opened up a yacht brokerage and repair yard. At the start, it was a hobby, but soon, thanks to his outgoing personality and professionalism, the hobby became a very good business. 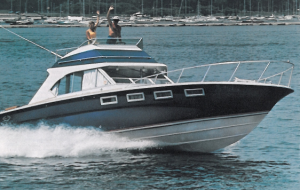 It was then that he saw the potential and demand for a fast boat on the Italian market—a demand that, like in the US, had developed on the back of the wide interest in offshore racing, which had rapidly become very popular in Europe as well. In his search for boats, Filippo went to the New York Boat Show in 1969 and discovered the Magnum 35, which made a strong impression on him. He immediately understood that this boat could change Mediterranean boating. It had everything that appealed to the European lifestyle: a large, open cockpit, an interior with full headroom, and spacious accommodations ; added to that, it also had a deep-V racing hull which gave a comfortable, dry, safe, and fast ride.

When Filippo imported his first Magnum 35 to Italy and exhibited it at the Genoa Boat Show in 1970, it proved to be an instant success.Thanks to the seaworthiness of the deep-V hull, the Magnum 35 suddenly made it possible for boat owners to reach the offshore islands, safely and only in a few hours. It was a race boat with a comfortable interior.

The press in Genoa coined the term “open” to describe the 35’s breakthrough styling, a term later used not only for the Magnum, but also for all the copies of this boat, which were the result of its amazing success. Within a year, Filippo was selling eighty percent of Magnum Marine’s production . Three years later, he was responsible for the sale of nearly every boat coming off the Magnum line.