The History of Go-Fast Boats 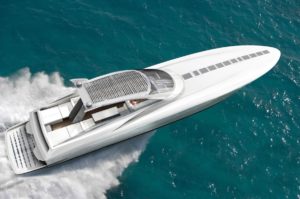 Here at Magnum Marine, we know that our employees and customers alike have a love for fast, luxury-forward boats, and nothing can dampen the quest for boats that go faster and feature newer tech and better performance. Be sure to check out our listings page for new and used super-fast yachts, and in the meantime, brush up on the history of faster-than-lighting boats by reading the article below, originally published on boatingmag.com.

The emerald-green waters of Florida’s Government Cut are calm when the engines of a long, slender boat start to rumble. The sound builds until, suddenly, the stiletto-shaped boat slices through the water, ripping long V-wakes that flatten out slightly as the speed increases fantastically. The boat zips through the Cut, looping north into two-foot swells, running along South Beach and finding its groove.

It’s a “go-fast,” a Sunsation 36 XRT, and it is perfectly in its element. So is Wayne Schaldenbrand, who built it. Nope, his boat is built in Michigan, but it’s here today, cutting through open water against the backdrop of Miami glitz.

This may be where modern offshore powerboats were born, but Schaldenbrand caught his bug for it from his grandfather, who hand-built Chris-Crafts and other mahogany treasures, then powered them with one or two of the biggest engines he could.

“My first speedboat ride was in one of those,” Schaldenbrand says. “It probably went 35 miles per hour.” That’s all he needed to launch him and his brother on a career of building and driving fast boats. He was where the heart of this sport still beats steadily with adrenaline and high-octane fuel.

The performance scene slipped beneath the mainstream boating radar the past few years, as the recession and outrageous fuel prices sent people away. But boats like the Sunsation, Formula’s FasTech 353 and the 50 Cigarette Marauder, which turned heads at the recent Miami International Boat Show, prove that performance boats are back. So too does the announcement from Mercury Racing of a new 1,100 hp engine, on the heels of last year’s 1,350 hp V-8. And that’s a good thing. The performance world has always pushed the envelope for all aspects of powerboating.

Most boaters associate the offshore performance world with a clip from the opening credits of the 1980s TV show Miami Vice. Sonny Crockett had a Wellcraft Scarab 38. But the need for speed actually traces back to the turn of the 20th century.

The American Power Boat Association formed in 1903 and held its first race on the Hudson River in 1904. Despite holding the race in New York, the scene then revolved around the Michigan boatbuilders, in close proximity to the auto industry in Detroit. Much advancement came from the mind of the famous wood-boat builder Gar Wood, who pushed his designs to get more horsepower on board.

The offshore scene started, as it did for Wayne Schaldenbrand, in the 1950s, with many racers from hydroplane backgrounds; these endurance races ran for hundreds of miles and laid the groundwork for the future.

Offshore performance boating as we know it today emerged through a confluence of events and people in the mid- to late 1950s. Sam Griffith, who worked with yacht broker Richard Bertram, helped found the race that would define the go-fast genre. He, along with boatbuilder Forest Johnson (the father of the famed boating photographer), developed an offshore race between Miami and Nassau, Bahamas.

Miami-Nassau became the premier offshore race in the United States. For a while, it was the onlyoffshore event. Winning it was akin to winning the Indy 500 — and the desire led Bertram to design a hull that changed boating forever.