The 10 Best Places To Go Yachting In May 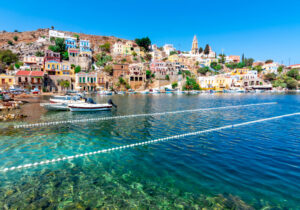 The Caribbean and Mediterranean are home to the 10 best places to go yachting in May. As summer approaches and the excitement of vacations approach, May is the perfect time to beat the crowds and experience water’s beauty before everyone else. Continue reading below to discover the must-visit destinations for May.

In May you can often find a last-minute or bargain trip with fewer people opting to go yachting in May as it is out of season for many destinations. Depending on where you decide to take a yachting trip too, May still has superb weather in the Caribbean and further afield the weather is favorable for yachting. With the Mediterranean season just beginning and the weather warming up. The water temperatures are still ideal for swimming when you go yachting in May.

1. Greece
Greece is one of the most popular destinations to go yachting in May with less crowded islands and marinas, as well as favorable conditions with small towns still open for business but, are less crowded. The weather when yachting in May in Greece is great with the average high for the month being 77f (25c) and the average low being 57f (14c). This weather is a lot cooler than July and August when it is often too hot to walk around and explore the villages, hike or participate in strenuous activities on the islands or mainland.

Greece has over 6,000 islands, many of which are both inhabited and uninhabited. The islands are split into main areas and groups of islands, which each have their own individual climates, winds, and sea conditions. These collections are the Dodecanese, Ionian, Saronic, Sporades, Aegean Islands, the Cyclades, and Cretan islands.

2. Turkey
The Turkish Riviera is a 1,000 mile stretch of coastline, with green mountains, crystal clear waters, historic sites, and superb beaches, making it a great place to go yachting in May. From diving in Antalya, visiting the archaeological site of Ephesus, the vibrant city of Fethiye, Ölüdeniz lagoon, the medieval castle, and the underwater museum in Bodrum.

Turkey is a great place to go yachting in May, thanks to its warm but cooler weather with an average temperature of 70f (21c), during this time each day has an average of 11 hours of daylight. The yachting conditions in Turkey in May are an average of 5 knots.

3. Amalfi Coast
The Amalfi Coast and its surrounding islands are popular yachting destinations in May with comfortable temperatures, uncrowded sites, and beautiful sunny days. The average temperature is a high of 73f (23c). During May the yachting conditions are slightly calmer than other locations with winds reaching 9 knots. The Amalfi Coast has lots of places to visit and things to see, making it a popular destination to go yachting in May, as the landmark places, are uncrowded and many offer low season prices.

Italy can become busy in the summer months, especially on the Amalfi Coast, which means everything from restaurants, anchorages, and marinas are quieter than in July or August. The towns of Positano, Sorrento, and Praiano are often crowded in the summer but May offers a break from the crowds.

4. Sicily
Sicily has a Mediterranean climate, with warm dry summers and cool rainy winters. It is one of the best places to yacht in May as the temperatures on average range from 73f (23c) to a low of 68f (20c). One of the best places to go yachting in May is in Sicily, due to its wind conditions. During May the winds are a constant northwest to a westerly wind, averaging 6 knots. Sicily is a great place to go yacthing in May as it has been considered a classical crossroads of Mediterranean culture.

Today, the island an exquisite beauty with Norman churches, Greek temples, and Baroque infrastructure forming it. The wonders don’t stop there, Sicily is also rich in natural resources – in fact, on this island, you will find Mt. Etna, Europe’s highest active volcano.

5. Belize
Belize is located in the Caribbean and is a small country in Central America, south of Mexico and next to Guatemala. Belize is home to the second-largest coral reef in the world named Mesoamerican Reef, which runs 350NM from Yucatan Peninsula (Mexico) all the way down the coast of Belize. This is the perfect location for snorkeling with over 50 species of corals, 500 species of tropical fish, whale sharks and seabirds.

The peak yachting time in the BVI is between December and April, with private boats venturing from the Mediterranean across the ocean, bring more boats and tourists to the area. By May many of these boats have had their high season with a small number being busy for spring break. But it is not as crowded as during the winter months. Spring is a great time to go yachting in the BVI with regattas and races happening and consistent winds. 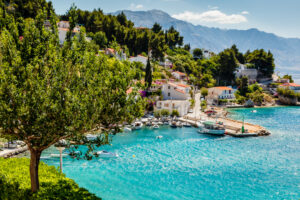 7. Croatia
Croatia yachting in May is the beginning of the summer season, with the temperature starting to warm up. The average temperature for yachting in May in Croatia is between 12c (54f) and 21c (70f). While the weather temperature increases the sea temperature sea averages 17c (63f) through May. Croatia has an average of 10 hours of daylight throughout May, meaning plenty of hours of sunshine to undertake activities and yacht around different places.

When going yachting in May in Croatia the winds tend to be stronger than other months ranging up to 9 knots and below. During this period the winds tend to be more unpredictable than during the summer, but still favorable for yachting. In May yachting in Croatia will give you the opportunity to experience everything Croatia has to offer, in terms of tourist attractions, restaurants, and national parks, without all the tourists they receive in the summer. Marinas also tend to be quieter, which allows for easy access for mooring without a large number of boats looking to dock at the same port, as the summer season is just beginning.

8. Malta
Malta is a beautiful island located in a group of islands located between Sicily and northern Africa. The archipelagoes are made up of three islands, Malta, Gozo, and Comino. Each island has beautiful bays to anchor in to discover the lush greenery of Gozo or the beautiful architecture or history of Malta and its old town Valetta. The islands have beautiful coves, bays, and beaches to explore, with turquoise waters and golden sand.

9. St Martin
St Martin is a place of sunshine and serenity, mountains and beaches, surrounded by turquoise waters and hidden coves, where you must take advantage of the yachts to truly absorb all that this amazing island has to offer. During the month of May, many regattas take place during the month which is great to participate in or watch. The northern French half evokes a more distinctly European feel with its cafes and French-speaking populace. Here you can enjoy a more secluded atmosphere: you can walk along miles of remote white sandy beaches as far as the eye can see, enjoying some well-deserved privacy among picturesque rocky outcrops.

10. Sardinia
Sardinia is one of the best places to go yachting in May, with lots of activities and things to do and see. Some of the best places to see are the Costa Smeralda with its scalloped bays which are ideal for dropping anchor and swimming in the crystal clear emerald waters. Golfo di Orosei’s coves, where sheer cliffs ensure seclusion or yacht to La Maddalena’s cluster of granite islands.

The islands are also a culinary paradise, with great varieties of pasta, bread and dolci, its own wines (Vermentino whites, Cannonau reds) and cheeses. Sardinia is one of the best places to go yachting in May with a water temperature of 17c (63f) and hot days with cooler evenings. The average wind speed in May is 9 knots, in a northwesterly direction.