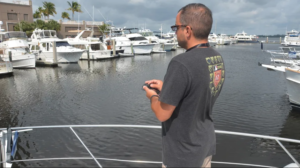 After maneuvering through tight dock situations over and over, have you ever wished that you could just dock your boat with a remote control? Well now you can. Dockmate, a new device that lets you control your boat remotely, started distributing in the United States just last year. In the article below, originally published in powerandmotoryacht.com, staff writer Ben Stein tests out this new device, and gives us the low-down on what to expect.

Many times I’ve wished I could step away from Have Another Day’s helm and control the engines from a better vantage point, or from where I want to handle a line. Enter Dockmate, a device that lets you control your boat remotely.

Dockmate started distributing in the U.S. in 2018, but the company began selling systems worldwide in 2012. Several thousand have been installed to date. Their latest model is capable of controlling two engines, one or two windlasses, a bow and stern thruster and a horn. The package includes a receiver under the helm, which is connected to each of the items being controlled, and a wireless remote.

This system has an array of options for integrating with engines, thrusters and windlasses to make the installation as simple and flexible as possible. On Have Another Day it controls my Volvo Penta QL bow and stern thrusters, twin Volvo Penta D12-EDC engines, horn and Maxwell 3500 windlass. According to the manufacturer, a five-function (two engines, thruster, anchor and horn) system with a twin remote will typically cost about $7,500 installed. A six-function (two engines, two thrusters, anchor and horn) with a twist remote connected to CAN bus-controlled engines will run about $12,500, but there is a litany of equipment-specific options that can influence pricing. It’s best to get a quote from a Dockmate installer.

Dockmate is designed to interface with electronically controlled engines. If you have mechanical engines with cable or hydraulic actuation of throttle and shift, Dockmate will refer you to Glendinning for a compatible mechanical-to-electronic retrofit. It also offers a transmission interface box to directly control transmission shift solenoids, thus bypassing proprietary engine control systems.

The receiver is a 9-inch-square box that mounts out of sight near one of the helms so that it can be connected to the various systems it will control. It contains a series of interface boards or relays to control each function. Critical ones like thruster and engine commands have double relays, both of which must close to engage the function. This safety mechanism avoids a stuck relay resulting in unintended actuation of an engine or thruster.

In the event of any failure, out-of-range condition, dead batteries or other unexpected events, the system will return to neutral and the engine controls at the helm will be active. Either 12- or 24-volt power can be supplied to the receiver from two separate sources for further redundancy. The receiver has a series of LEDs on top of the enclosure that light up when a function is activated.

Dockmate offers two styles of remotes, one with membrane push buttons available for either single or twin engine installs—called the Dockmate Single and Dockmate Twin—or the Twist, which is a joystick-style remote for twin-engine and pod–driven boats. The Twist provides joystick control of the boat, so for example pushing forward and starboard will result in the boat moving in that direction while a twist of the remote’s stick will result in the boat twisting as well. All remotes are waterproof and float, though Dockmate also includes a neck lanyard to help you keep the remote from going overboard.

The Twist remotes have rechargeable batteries that are juiced up using a wireless charging pad; the Single and Twin remotes use alkaline batteries. The pad uses the Qi wireless charging standard, so I was pleased to find I could swap chargers with the Raymarine Ray90 wireless handset as well as charge a Samsung -Galaxy phone. The receiver and remote link wirelessly over an FM spread spectrum link utilizing five different 433mhz frequency channels at the same time to avoid interference, and in my testing that worked well.

Immediately after installation I walked the remote down the dock and tested the range using the horn. In a marina surrounded by homes and full of boats, I found range to be in excess of 300 feet, and in regular use I’ve never had a single control input fail to transmit and execute the command. Incidentally, if the remote does get out of range, it will beep when a button is pressed and the link light will blink to indicate a failure (something I only experienced when I walked hundreds of feet down the dock).