Peter Janssen, longtime editor of MotorBoating Magazine, who has written about Magnum since 1982, agrees: “In many ways, since Ted died, she is the brand. She’s charismatic, extremely personable, beautiful, smart, sophisticated, and well-traveled. Magnum’s design and performance set the bar for luxury performance boats. Magnums are almost perfect in their design and execution. This was true under Ted; in a sense it’s even truer under Katrin, as the size range has moved up.”

As she became more comfortable in her role as president, Katrin’s vision for Magnum slowly began to differ from her late husband’s. She shared the concept of building larger yachts, but wanted to allow clients to express their individual personalities through them. “I was not as interested as Filippo in building a production boat,” says Katrin. “I wanted to build the very best and most beautiful Magnums, with an emphasis on quality and design. The Magnums I sold each year were less than in Filippo’s time, but they were more individualized, with greater attention to detail, design and performance. They also became bigger and more expensive.” 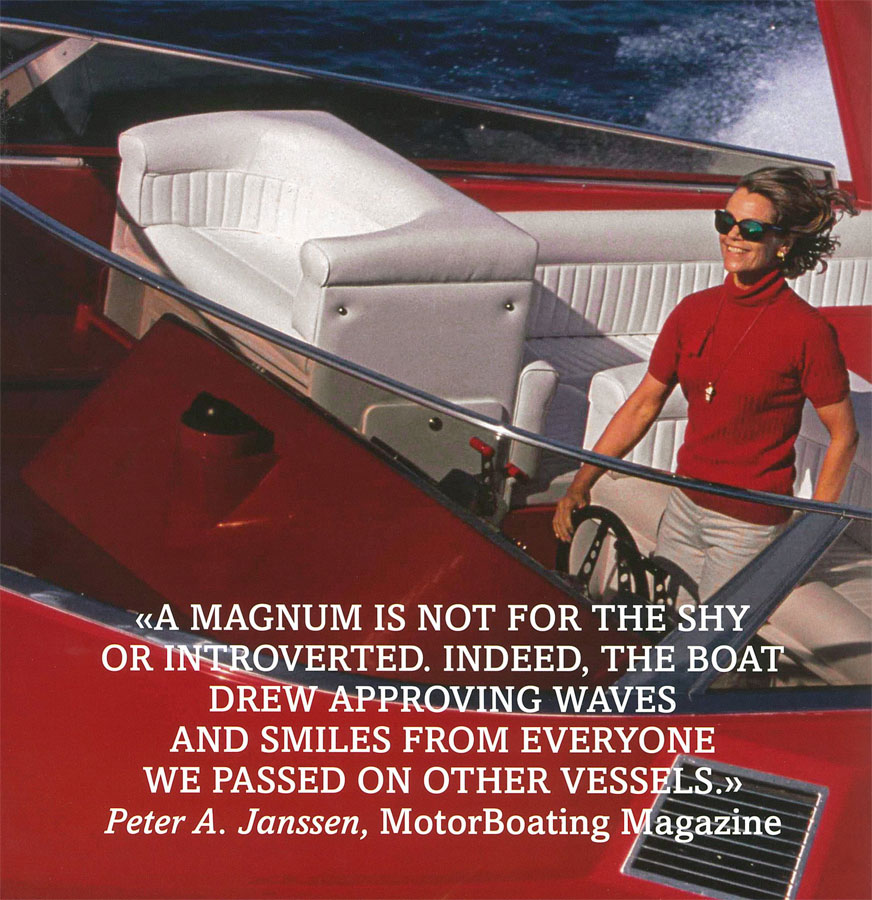 Katrin at the helm of the Ferrari-red Magnum 53

While Katrin was deciding how to proceed with the design of her first new model, a young German client came to Magnum Marine and asked her to build a Ferrari-red Magnum 53 to match the color of his Ferrari. He insisted that not only the hull, but also the deck be Ferrari-red. This was revolutionary: decks were traditionally white or whitish, so as to keep the boat cool and so that the deck color would not fade. Katrin tried her best to talk the client out of having a red deck, enumerating all the disadvantages. The client would not change his mind and instead told Katrin to find a UV-resistant paint for the deck. Katrin built the Ferrari-red Magnum, which was gorgeous. The client had been right to insist. Not only did the boat look spectacular, but also it was probably the first time that any boat had ever been painted all in one strong color. It was innovative besides beautiful and the boat was featured on more magazine covers than most any other. “It showed me that decks need not necessarily be white, that the Magnums looked sleeker in just one color and that colored hulls enhanced Magnum’s presence on the water. This boat changed the way I looked at future Magnums. I had learned something from my client, which I immediately applied to all my new projects.” says Katrin.