This week we are featuring a section from the Magnum Marine 45th Anniversary Book. Available for purchase CLICK HERE.

When Filippo died in 1990, Katrin was devastated. “I had lost the person I loved and worked and lived with for the past twenty years.”

Because Katrin loved Magnum, because she felt an enormous responsibility towards all those who had been working at Magnum – after so many years, Magnum was as much an extended family to her as a business – and lastly, because she was irked and challenged by being told that no woman could ever run a boat company, she decided not to sell Magnum Marine. In spite of the odds stacked against her, less than a month after Filippo’s death, Katrin represented Magnum at the Genoa Boat Show. Rumors were rampant that she was there to find a buyer for the company, but the opposite was true. she had discovered that Magnum had become her life and her passion, and she was going to keep her husband’s legacy alive. 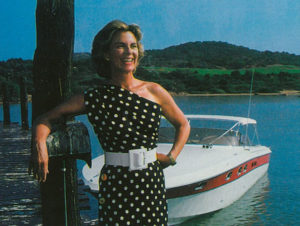 Katrin and her Magnum 40

Realizing that the success of the company was directly related to the amount of confidence clients had in her abilities, within six months she gained the skills she had been lacking. She learned how to drive a boat and sat for hours in the engine room until she understood everything that had been foreign to her. That summer, for the first time without Filippo, she built a new Magnum. It was a Magnum 40, and when it was completed, she navigated around the Mediterranean, as she had always done with Filippo. Everything became easier after that. “Clients accepted me and respected my knowledge, just as they had respected Filippo.”

As the next two decades demonstrated, Katrin was not to be underestimated. “She was a moving force behind the company from the beginning,” says Howard Arneson. “She and Ted complimented each other. It’s no surprise that, after Ted died, she was able to continue on with the business. In some ways, she has taken the company farther.”

Check back next week to continue reading – Refining The Brand | Passion as Art – Part 2.