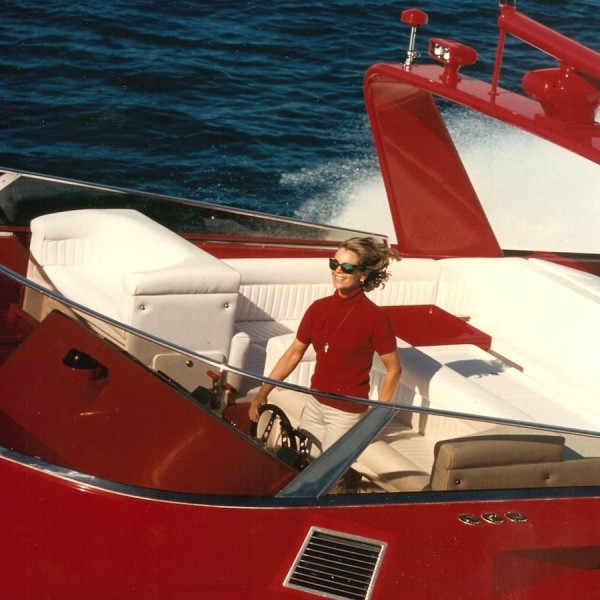 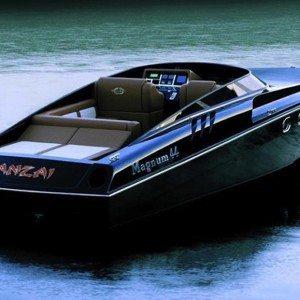 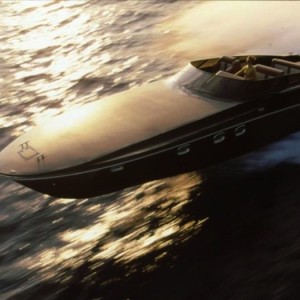 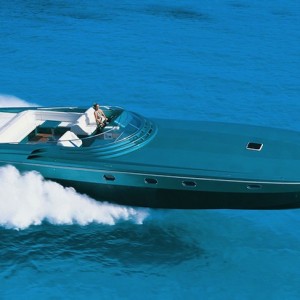 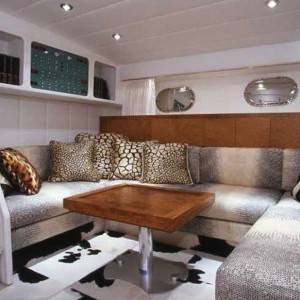 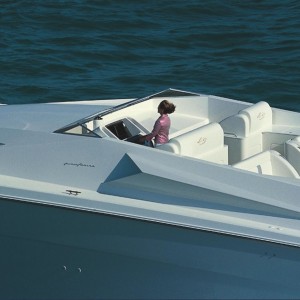 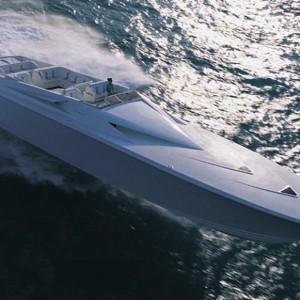 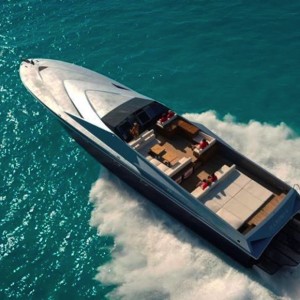 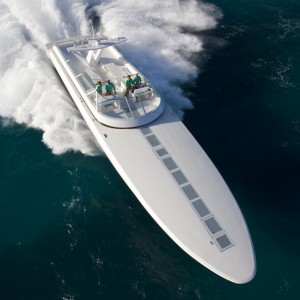 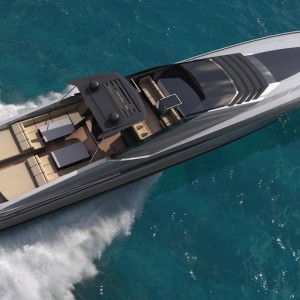 In 1990 Filippo Theodoli died, leaving the Magnum boatyard to his wife Katrin. Because Katrin loved Magnum, because she felt an enormous responsibility towards all those who had been working with Magnum for so many years, and lastly because she was irked and challenged by being told that no woman could ever run a boat company, she decided not to sell Magnum Marine and to keep her husband’s legacy alive. Whilst she secretly learned how to drive a boat, she thought about designing her new and ideal Magnum. She consulted with Pininfarina and other designers such as Paolo Martin and the Brazilian Luiz de Basto.

In 1993, three years after Filippo’s death, she launched her first new model, the Magnum 50’ “Bestia” or “the Beast”. This boat was unbelievable and Katrin tells the story that, when she first took the new Magnum 50’ for a test run and photo shoot with a helicopter overhead, she ran into enormous gale force winds and huge waves. She put her hand on the throttles to see what her new boat would do; the acceleration gave her a jolt – it was like taking off with supersonic speed – and the speedometer showed 72 MPH. But, at the same time, the ride was smooth and comfortable. The Magnum sliced through the waves and felt as if she were driving on a flat highway. After the photo shoot, the photographer said: “I have photographed many boats, but I have never seen such a performance in rough seas. She’s not a boat, she’s like a beast.”

The interiors of the new Magnum 50’ were designed for Katrin by the French House of Hermes. HM the King of Spain immediately ordered one of Katrin’s new Magnum 50’ power yachts. In 1999, Katrin developed a new Magnum 44’ designed by Luiz de Basto, one of the most admired vessels of the new Magnum fleet. There are many Magnum 44s in St. Tropez and the story was told that a Magnum 44’ with its deep-vee hull at high speed once sliced another boat in half… no one was hurt, but it clearly proved the strength of the Magnum hull. Shortly thereafter, in 2001, Katrin launched the new Magnum 60’. Katrin designed the new Magnum 60’ herself. After sea trials and speeds of close to 70 MPH, she called her new model “Furia”. Furia has become the most successful of the Magnum models, beautiful, spacious and fast.

Katrin’s designs are a statement of performance and utmost luxury. The requirement is that Magnums not only perform but are also quiet, comfortable and of the best quality. Katrin asked Roberto Cavalli to design the interiors of the first Magnum 60’ for the famous rock star Lenny Kravitz. The press described the Cavalli interiors as “shagadellic” and “cool”. Lenny Kravitz is said to love his Magnum, which he uses to commute to his house in the Bahamas. He is quoted as saying:

“I did not buy my Magnum because it is a status symbol. I bought it to leave the world behind.”

Soon, another rock star, this time the legendary French singer Johnny Halliday, would buy a Magnum, which he took delivery of in St. Tropez. Also in 2001 Katrin launched the first Magnum 80’; the largest Magnum ever built. The new Magnum 80’ hull was designed by the famous naval architect, specialized in performance, Michael Peters. The composite/epoxy hull structure ensures a lighter weight and improved fuel efficiency and performance. The deck was designed by the talented Italian designer, Fabrizio Valentini of Pininfarina.

Another 80’ model was launched in 2008, followed by a gorgeous new Magnum 70’ model designed by Italian designers, Lazzarini & Pickering. The new Magnum 70’, equipped with Twin MTU diesels of 2600HP each coupled to surface drives, flattens the sea as if she were a huge Mack truck. Again, at close to 70 mph, she is the fastest high-performance yacht of this size in the world today. Interiors by the famous Italian architects, are spacious and beautiful; minimalist in style and all-white, mostly in leather, they provide exquisite design and luxurious finish. The performance and the stability are amazing, as one of the officers of the U.S. Customs who tested the Magnum wrote: “Magnum is the finest performance offshore craft in existence today”. New on the drawing board, the Magnum 100’, for which Katrin has chosen the brilliant young Italian designer Alberto Mancini.

More to watch at Magnum Marine in the future.