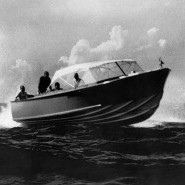 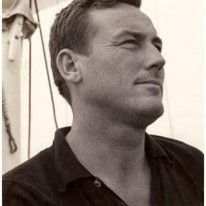 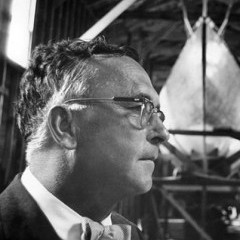 “Other boats (powerboats) had vee bottoms before, but the vee and the deadrise (the angle the bottom makes with the horizontal) diminished to a flat planing surface at the transom.  Ray carried the deadrise to the transom.”

Ray Hunt‘s design had a 24-degree deadrise.  Hunt rightfully deduced that such a treatment would eliminate much of the pounding of conventional hulls.  An added feature of the new Hunt designed boat were longitudinal strakes on the bottom to give added lift and throw out the spray flat to help keep the boat dry.  Deep-vee boats did, however, require more horsepower. Dick Bertram commissioned Ray Hunt to design a 30’ wooden boat for him.  The boat was completed in 1960.  This was the first of a series of Moppies and the beginning of the Bertram Boatyard.  Moppie ran straight and smooth and, at 52 mph, faster than anyone had expected.

In 1962, Don Aronow, a retired real estate developer, impressed by the success of the deep-vee hull, asked Jim Wynne and Walt Walters to design a 23’ deep-vee hull for twin engine application.  This was the first of the famed Aronow hulls, which in various but similar forms he promoted first under the name “Formula” (1963-64); then “Donzi” (1964-66); then “Magnum” (1966-68); then “Cigarette”.