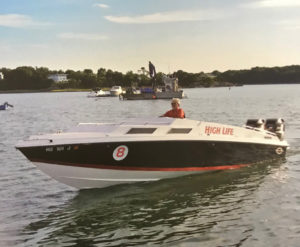 I am the son of Michael Spirito, who passed away not too long ago. He loved his 1971 Magnum 27 Sedan so much and had continued to make tweaks and mods since purchasing it in late 2001.

After starting a new career, I had been telling him how I’d hope to bring him to Florida to let him pick out his first new Magnum after I made it big and he’d respond that he loved what he had, which was true. Not a conversation went by that High Life was not discussed in one form or another.

After work and on weekends he was usually found wearing one of his various Magnum polos cruising around the Greater Boston area or working on it in the garage or on the dock.

I just wanted to thank everyone at Magnum for providing such a great boat that gave my dad so much joy over the course of his life. I can’t wait for the day that I get to purchase my own and continue the family tradition.