My Boat Remains the Love of My Life | Magnum Marine Stories

I’ve had two Magnums, a 35′ which I totally restored during the mid-1990s, and a lovely 53′ which I sold in 2004. I currently have only a 28′ Center Console, which I understand was designed by Aronow for Carl Kiekhaefer; the molds were later acquired by Blackfin. My boat was built by them in the late 1970s, restored in the early 1990s, and remains the love of my life. 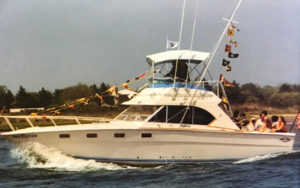