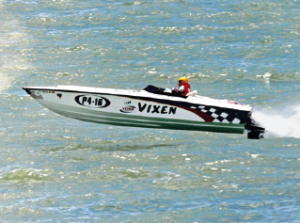 Check out Mel Voss’s testimonial about his Magnum 27′ Sport!

The thing I liked about Vixen was how simply she was built, but still very strong.

I’m not going into everything we did to put her back in shape, but I have to say it is the straightest, squarest boat I have ever worked on, and also the strongest. In 2003 I went back to APBA to try and win that OPBRA Cup I wanted. We started with a win in St. Cloud in P5 class, then a second in Marathon, and a first in Sarasota. Then on to St. Pete for the nationals. A first there, and Vixen had her P5 National Champion and also her OPBRA first place Champion Cup. And that was more than I had wished for. I hope this helps. I can talk for hours about racing on Vixen but to put it on paper is something else. One other thing: I think Gio and his mother were the two nicest people we’ve encountered.