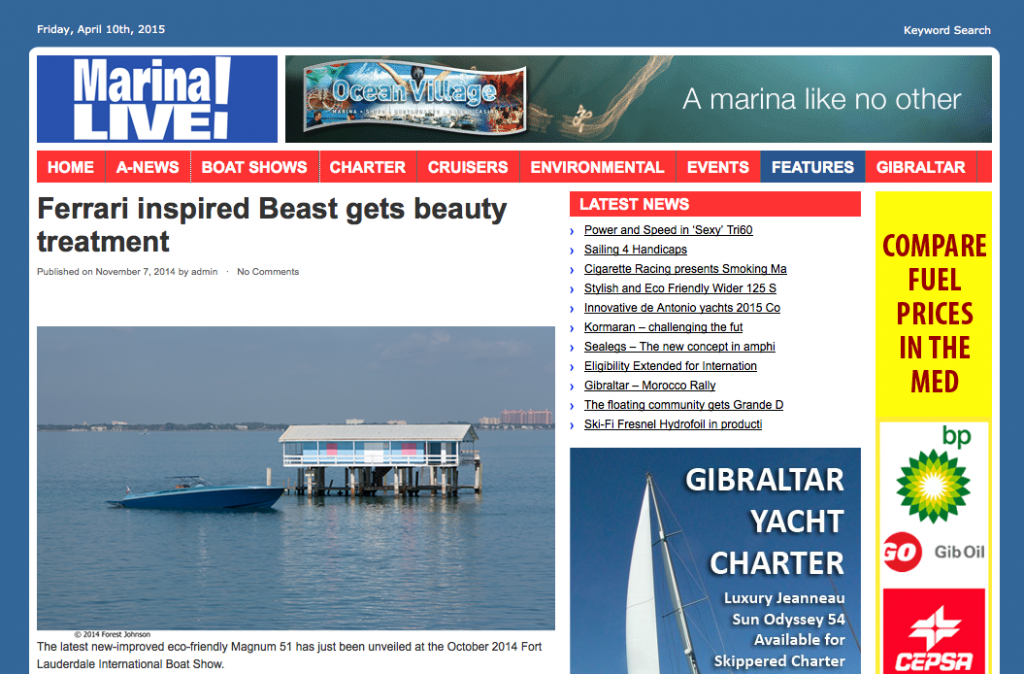 Marina Live! is digital news source based in Gibraltar that published articles on everything related to the nautical lifestyle prevalent in the area, including yachting, local news and events, boating, charters, and much more. Check out the article they published below, featuring the Magnum 51′.

The latest new-improved eco-friendly Magnum 51 was unveiled at the October 2014 Fort Lauderdale International Boat Show. Yes, you heard right, this 74mph (119kph) powerhouse of a boat, known as “Bestia” (Italian for Beast), has been given an environmentally friendly makeover.

Not only does it have better fuel economy, but it also has lower emissions and is noticeably quieter. However if you’re traveling through the waves at 74mph the idea of a quiet ride is relative, I’m not sure you’ll be able to hear a pin drop.

At 70mph the Magnum 51 uses only 100 gallons of fuel an hour, this is due to a number of factors: stiffer lighter hull construction, common rail engines, a revamped surface-drive system and a lighter weight overall.

Don Aronow, ‘The King of Thunderboat Row’, founded magnum Marine in 1966. Aronow was an offshore racing champion, avid boat builder and serial company founder. In 1962 he founded Formula Marine, selling it on two years later, and in 1964 he started Donzi Marine, building the factory on 188th Street in Aventura, North Miami.

He sold Donzi two years later and set up Magnum – and built the new Magnum factory right next to Donzi. Two years later, when he sold Magnum and set up his fourth company, Cigarette, he built another factory next door making the street a bustling hub of boat building, and it has been called ‘Thunderboat Row’ ever since.

Since his untimely death in 1987, age 59, Aronow has left behind an amazing boating legacy. All of these companies, and Thunderboat Row, are still going strong. 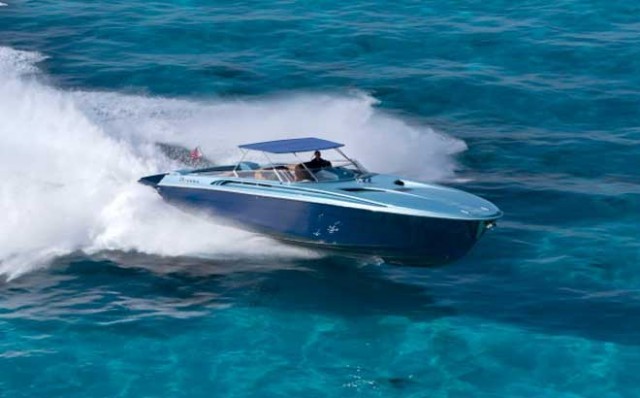 Back to the Beast. The predecessor of this latest Magnum 51 was the Magnum 50 which was launched in 1993. This was the first boat to be unveiled by the current owner of Magnum, Katrin Theodoli, who took over the Company after her husband Filippo’s death in 1990. She is the only female CEO of a high-performance boat building business.

Katrin designed the Magnum 50 after consultation with a number of designers including famous independent Italian car design firm Pininfarina of Ferrari fame.

Not content with a Ferrari-inspired hull, Katrin ensured the designer vibe continued below decks, and the interiors of the Magnum 50 were designed by French haute couture house, Hermès. It was a boat fit for a king, so rather apt that Juan Carlos, the then King of Spain, snapped one up.

The latest Magnum, the 51, is just as luxurious as its predecessor. On the main deck there is a huge swimming platform from which you can gracefully move onto the full-width aft sunpad.

Moving forward there is an L-shaped seat for relaxing and socializing and, forward of this, the port helm station with seating for two and a second double bench seat to starboard.

Below deck the Magnum 51 is surprisingly spacious with approximately seven feet of headroom. There is a large salon and galley, a comfortable double cabin with a queen-sized berth, a large head with stall shower and there is even enough room to squeeze in a crew cabin.

This article originally posted on MarinaLive.gi.

How to Correctly Plan your Yachting Route
January 4, 2022