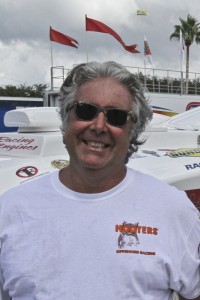 Giancarlo Cagiano, from Napoli, Italy, is a Magnum Marine owner, boating enthusiast, and as of this year, has been the throttleman for the Instigator/Hooters Offshore Race Team. Check out a feature below, highlighting his work with the Hooters team during the 2014 Super Boat International Offshore Racing Circuit, including his recent WIN in Key West for the Superboat Extreme World Championship Title!

Continue the story of Giancarlo Cangiano sports. Another season that ended with two important successes achieved just where the speedboat sport has been further developed: the United States of ‘America.

Having triumphed in Europe, winning numerous titles Gladden, Continental and National, this year the Neapolitan pilot had decided to try the fascinating American experience and a new challenge: to be the first Italian to win a world title in America. The adventure began last June when Giancarlo Cangiano has received an offer from Team Instigator’s champion Peter Meyers to sit beside him with the role of throttleman. This is a role in which Giancarlo has proven to be one the best in the world. The US National title was immediately won over with three wins out of six races during the 2014 Super Boat International Offshore Racing Circuit.

The big goal was the Super Boat International World Championship, which takes place every year in Key West (Florida), now in its 34th edition. Objective Giancarlo Cangiano repaid the faith of the American team with three hard-fought races that saw the team Instigators-Hooters win the world title in the Superboat Extreme class on Sunday, November 9, 2014. Giancarlo said on his return to Naples, “For me it is a great satisfaction to have been the first Italian to make the Italian flag waving in the World Championship in Key West.” After winning in Europe, it was an honor for Cangiano, he explained, to accept the offer from America, and be able to triumph even in a league where he was up against the elite of the boating world, and the culmination of a career.