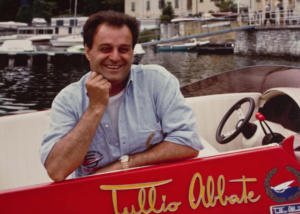 Magnum Marine is saddened to hear of the loss of legendary boat builder, Tullio Abbate. His dedication to the racing world left a huge impact on the industry and he will be missed greatly. Read the article below to find out more on Tullio, the mastermind behind the Como Powerboat.

Tullio Abbate, 75 years old, Como legend of motorboating, king of luxury boats, a name known and celebrated all over the world, has surrendered to Coronavirus.

Abbate had been hospitalized for days at the San Raffaele in Milan and fought with all his might against the cursed COVID-19, who however had the upper hand despite the hard skin of the champion.

Abbate has collected victories in all the leagues since the Centomiglia del Lario so dear to him and won eleven times. Author of amazing performances, over the years he has set speed records in series, triumphing in numerous European and world competitions.

In 1969 – with the unmistakable DNA of the legendary father Guido – he opened his construction site which churned out real jewels of the water continuously.

If Tullietto has become Tullio Abbate, it is all thanks to an old woman from Nesso, who no one has ever known her name, nor who she was and, above all, no one has ever even been able to thank.

Little Tullio saved her. He was inside the lake, on a cold March afternoon, with the water still freezing and the fear of dying in his bones.

It happened on March 18, 1958. Tullio was fourteen years old and, that time, with the approval of his father Guido, who had started to let him go by boat when he was ten years old, he boarded a Three Points boat of the navy. It was a splinter of boat, two-seater and, at the helm, there was the legendary Count Guido Monzino, the last lord of Villa del Balbianello. The destination, that day, was the castle of Moltrasio and the speed was from maximum engines, as the count had always liked and as Tullio was already beginning to like.

Down to thunder, with a deafening roar, with the keel breaking the waves and the villages on the coast that darted away.

It may have been a manufacturing defect, or perhaps, more likely, the excessive speed, the fact is that, suddenly, one of the connecting rods, with a terrifying bang, broke the engine and went to rip the keel. Matters of moments and the Three Points began to embark water and sink into the darkness of the lake. The count managed to cling to a piece of the boat left afloat and Tullio to hold himself up, by force of strokes, with a pillow under his belly

More than two hours like this, in the middle of the lake, with the cold that stiffened the muscles and no one on the horizon that came to save them. That time, Tullio and also the count, brought home the skin only thanks to a woman from Nesso.

” I heard a boat stop in the middle of the lake and it never left again – she said agitated, looking out the rowers’ door – It was a big boat! Go and see prima de truvai mort! » .

The boat of the rowers, a two of a couple, with the vogue chief Riccardo Ferrari, arrived in the middle of the lake when the count, exhausted from fatigue, had now passed out and was so sure of going to the bottom, that he had already slipped from the with the heavy gold chain, the precious family watch on the wrist and the wallet with 750 thousand lire inside. He had passed the precious booty to Tullio and, without more strength, was now letting himself sink.

At the last moment, Riccardo harpooned him, inserting the hook of the sailor in the neck of his jacket. They pulled him into the boat and, after him, rescued even little Tullio.

As a sign of gratitude, Abbate shipyards have sponsored the Nesso rowers for more than twenty years and for as many years Count Monzino arrived in Azzano on his black Ferrari spider every Christmas and sat at the table with mom Paola and dad Guido. And each time he told how good their Tullio had been helping him to stay afloat on that damned day when he made fun of the Three points.

And now that many years have passed, the list of celebrities who landed at the home of the “speed king” is endless. He remembers them all, because everyone built a boat to fit their passions.