Magnum 51′ Bestia: Beauty and the Beast

See what happens when you strap 3,200 horsepower, Arneson surface drives, and Rolla surface-piercing propellers to a 51-foot boat—as told by Gary Reich of Boats.com.

At first glance, the Magnum 51 Bestia might make you feel as if you’ve been time-warped back to the ’80s, when Sonny Crockett and Rico Tubbs were chasing drug kingpins around Biscayne Bay in the popular television series “Miami Vice.” In fact, the paint scheme of the Magnum 51 Bestia I ran across at its launch during the 2014 Fort Lauderdale International Boat Show immediately reminded me of Crockett’s legendary Wellcraft Scarab 38 KV.

The 51 Bestia (that’s Italian for “beast”) is a very different animal compared to those go-fast boats of the ’80s, however. Yes, of course it’s fast—70-plus mph fast. But speed isn’t what this boat is all about. What’s special about the Magnum 51 is its ability to run those speeds in ultimate luxury, comfort, and safety. Seventy miles per hour on a calm, costal bay is no joke, but doing 70-plus mph comfortably on the ocean with a boat full of guests is an entirely different ball game. Hold on to your hats, this is going to be quite a ride.

Magnum Marine has quite a history in the performance boatbuilding arena. Founded in 1966 by Don Aronow, who had just sold the Donzi factory he built in Miami, FL, Magnum Marine was bought by a Chicago businessman in 1968. An Italian from Rome, Marchese Filippo Theodoli, became the first exclusive European Magnum dealer in 1969, and then went on to buy the company in 1976 with his wife Katrin. 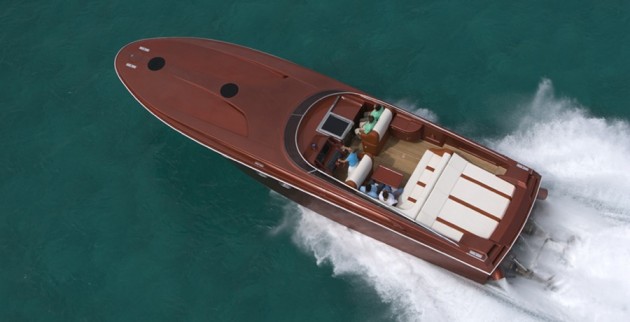 Theodoli passed away in 1990, leaving a legacy of incredible luxury performance boats behind. The boatyard and business were left to Katrin. Irritated by naysayers who told her no woman could ever successfully run a boatbuilding company such as Magnum, and wanting to continue her husband’s legacy, Katrin immersed herself in learning everything she could about the business and boats—including figuring out how to drive a boat in secret.

Still involved in the business today, Katrin was at the Fort Lauderdale Boat Show aboard the new Magnum 51 Bestia. She exudes the same confidence, elegance, and boldness that her boats do. While that may sound corny, I think Katrin’s elegant yet feisty spirit is an important part of what these boats are all about. She’s the beauty to the Magnum line’s beastliness.

The Magnum Marine lineup today consists of six models ranging from 44 to 100 feet in length, and all are built in Aventura, FL. The Magnum 51 Bestia, brand-new at the 2014 Fort Lauderdale Boat Show, actually began life in 1993 as the Magnum 50 Bestia; it was the first new model launched by Katrin after her husband’s death. This new model is lighter, slightly faster, and more efficient than the model it replaces. “This boat has been thoroughly refined and improved, but it still slices through ocean waves and rollers like a knife,” Katrin told me.

Speed and performance are delivered by a pair of 1,600-horspoewer MTU 10V 2000M94 diesels mated to Arneson surface drives tipped with Rolla NiBrAl surface-piercing propellers. Katrin said that the 51 Bestia can top out at 74 mph with this setup, burning an amazingly efficient 100 gph at that speed. Reasonable and efficient cruise speeds settle in around 55 mph, though for the best combination of both speed and efficiency, I’m told 45 to 50 mph is the best range. A pair of 1,950-horsepower MTUs are an option.