How Magnum Marine Changed the Course of Boating History 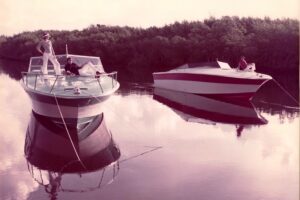 Have you ever wondered how Magnum Marine became what it is today? The article below gives more information on the start of Magnum Marine as a company and takes you through our journey creating cutting-edge boats. Keep reading to learn more about the history of Magnum Marine!

Most businesses sink or swim. That is to say, when a new business or brand first floats a fresh, unique idea, it will tend to either be snapped up immediately — or left untouched, unnoticed, and left to descend into the depths of obscurity.

Magnum Marine did neither. But then, Magnum Marine is not a normal business. From its unorthodox beginnings in 1958, through multiple name and tack changes, to the hugely well-respected brand it is today, the American boatbuilder has taken more dips and detours than any other marque on the water.

So cut the engine, kick back and enjoy a whirl through the salt-sprayed, record-breaking, innovative history of Magnum Marine. It’s quite the ride.

Magnum Marine began almost a decade before it was Magnum Marine. The name, as we know it today, wouldn’t float into being until 1966. Eight years before that, at the 1958 America Cup Trials, is where our story starts — where the hull designs of Ray Hunt, first-class helmsman and nautical trend-setter, were making a splash.

Hunt’s ‘deep-vee’ boats featured a unique 24-degree deadrise — meaning that the hulls sliced through the water in a considerably smoother manner than their competitors, and any repeated pounding on the front of the vessel was all but eliminated. Hunt’s designs also featured longitudinal strakes on their undersides — engineered to throw any sea spray out flat, and keep everyone on board dry.

Dick Bertram, a champion sailor and the chap in the photograph above, was very taken with Hunt’s innovation. He commissioned him to build a boat — the design of which would become the cornerstone of the Bertram Boatyard. Don Aronow, a retired real estate mogul, was similarly swayed by Hunt’s designs, and asked naval architect Jim Wynne to design a high-performance ‘deep-vee’ racing boat for his own personal use. Several models followed this first into Aronow’s collection, starting with ‘Formula’ in 1963, ‘Donzi’ in 1964 and, finally, in 1966, ‘Magnum’.

This 27-foot race boat, officially named the ‘Maltese Magnum’, became World Champion, and Don Aronow was buoyed enough by his success to build a small factory on a street in North Miami. The factory was immensely successful — the neighbourhood was even nicknamed ‘Thunderboat Row’ as a result — and he kept pushing Magnum Marine to innovate.

First came a new 35-foot race boat, seen above, which soon joined its little brother on championship podiums around the world. Then, a 16-foot ski boat named the ‘Marauder’ and a 16-foot tunnel hull, the ‘Missile’. Finally, in 1968, came Clayton Rautboard. Who was not a boat.

Rautboard, like Aronow, was a businessman. But, also like the retired real estate tycoon, he was a boat racing enthusiast. The Chicagoan owned a photocopying empire called Apeco — giving him enough money to buy Magnum Marine outright from Aronow and revolutionise the company. He pared back the production line, keeping only the 27-foot and 35-foot models — and customising the smaller boat into sedan, racer and lifestyle variants. Business boomed, and the late sixties saw Magnum make waves through the entire industry.

By 1969, the Magnum 35 was incredibly covetable — and became a hit at the New York Boat Show. It was here Italian Marchese Filippo Theodoli first saw the boat — and immediately fell in love.

The Roman wanted a boat for the Mediterranean. He wanted a vessel he, as the owner, could operate. He wanted speed, seaworthiness — but also comfort and luxury. He wanted a safe ride, something practically unsinkable and with the interior accommodation of a much larger boat. The Magnum ticked every box. And so, enthused and convinced about Magnum’s future success, Theodoli bought one on the spot — and became the exclusive European Magnum dealer.

He didn’t stop there. By 1976, Theodoli had bought Magnum Marine as a whole. He decided to make another major change to the brand, shifting focus from racing boats to luxury yachting — and invented a whole new class, the ‘open sport yacht’. Suddenly, Magnum Marine was producing reliable, fuel-efficient and easily drivable yachts by the boatload. The Mediterranean had never been smaller, with islands opening up for the first time in history, hotels springing up on Corsica and Sardinia and transport and tourism links booming. Theodoli had changed everything.

And the boat with which he did it was the Magnum 53 above. With more headroom and two double cabins, these were luxury boats with racing power. Each had a saloon, a galley and a crew cabin, and their versatility and practicality made the model an overnight success. Similar vessels followed; the Magnum 45 in 1980, and the Magnum 40 after that.

New technology, too, was something Theodoli kept pushing for. He partnered with Howard Arneson, the inventor of the Arneson surface drive, to incorporate the new system into future designs. He also asked his friend Phil Rolla to build efficient customised propellers for these new surface drives. He even turned to Ferrari’s favored design house, Pininfarina, to add a touch of flair to the exterior design.

When Theodoli died in 1990, he left Magnum Marine to his trusted wife, Katrin. She overcame her own challenges and problems within the industry and launched the Magnum 50 — the ‘Beast’ — in 1993. The boat was in a class of its own, with Hermes-designed interiors and almost supersonic speed. The King of Spain even put in an order, and this stamp of approval cleared Katrin’s way to push Magnum Marine faster and further into the future.

And power it she did. The much-admired Magnum 44 came next, designed by Brazilian Luiz de Basto. In 2001, Katrin herself designed and launched the new Magnum 60, nicknamed ‘Furia’ for its speeds of up to 70 mph. Johnny Halliday bought a Magnum Marine, and Roberto Cavalli designed the interior of a Magnum 60 for Gentleman’s Journal cover star Lenny Kravitz.

In the years since, things have got better — and bigger. The early 2000s saw the Magnum 80 launched, with a deck by Italian designer Fabrizio Valentini of Pininfarina. The Magnum 70 followed, quickly, in 2008. The fastest high-performance yacht of its size in the world, the 70 is also one of the most stable boats on the water — thanks to a flawless design by Lazzarini & Pickering.

And the innovation looks set to continue. The latest vessel on Magnum Marine’s drawing board is the Magnum 100. Designed by talented young Italian Alberto Mancini, it promises to be the most environmentally friendly, the most comfortable, the most seaworthy and the fastest new yacht in the world. It’s a far-cry from those flat-out, deep-vee racers at the 1958 America Cup Trials. But then, Magnum Marine has revolutionized the entire yachting industry in the half-century since then — so it makes sense that it’s still floating a few new ideas now.