Formula 233: Don Aronow’s Passion for Magnum Lives On As Legacy

Don Aronow will always be remembered for his legacy as founder, designer, builder, and racer for Magnum Marine. Throughout the course of his illustrious career, he built boats for the likes of George H. W. Bush, Malcolm Forbes, Charles Keating, and Lyndon Johnson. He won his first World Championship in 1967 while racing two 27′ Magnums, and went on to win more than 350 offshore races. Here’s a story about his very first build, before the birth of Magnum Marine: his 23-foot Formula 233. 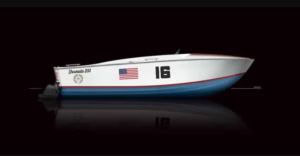 Few people had the need for speed that Don Aronow felt. His passion left the marine world a fleet of high-performance powerboats—including the brands Formula, Magnum, Donzi and Cigarette—that still turns heads and wins races today. This 23-footer was the one that started it all.

Aronow, born in 1927, made his money in New Jersey construction and then moved to Florida in 1960. He began racing speedboats as a hobby, but they never seemed fast enough. In 1962, Aronow brought together veteran race driver Walt Walters, designer and sterndrive inventor Jim Wynne, and a rigger. The combination was a winning formula. He called the group Formula Boat Company.

This talented team went on to produce the Formula 233, the first boat built under the Formula banner. It was all fiberglass, with a length of 23.3 feet, an 8-foot, 3-inch beam and a dry weight of just over 2,000 pounds. Standard power came from a pair of 255-hp MerCruiser inboard gas engines. The layout was simple, with an open cockpit, a starboard helm station and a cuddy cabin.

It was the boat’s performance that caught people’s attention. The 233 was an instant winner on the race circuit, which included the grueling Miami-Nassau and Miami-Bimini offshore races. With big power and a deep-V hull, a Formula 233 with a pair of optional 310-hp gas engines topped out at 44 knots and could handle the offshore conditions of an ocean race.

Aronow sold Formula in 1964 and went on to start Donzi Marine, Magnum Marine and the Cigarette Racing Team, while earning two speedboat world championships and three national titles. He died in 1987 while sitting in his car, shot by a hitman who was allegedly paid by a rival boatbuilder and drug dealer to kill Aronow.