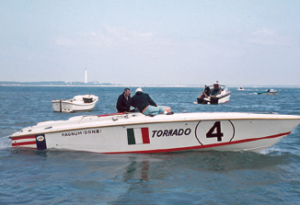 Balestrieri and Pruett won the Sam Griffith Trophy in 1968 in Miami with the Magnum 27. Balestrieri then took the Magnum to race in Europe and it sank when competing in a very rough Cowes-to-Torquay race in August 1968, when he was in the lead.

“The crew (Balestrieri and Pruett) was rescued,” writes Dag Pike. Ian Toll was a local powerboat enthusiast. He wanted to buy the boat because he believed it would be washed ashore. Pruett was so impressed by this, he immediately contacted Ian to set up a meeting in the UK to meet the nutcase who wanted to buy a boat 180 feet under water. The meeting took place in Southampton in early October 1968. Pruett took Ian and his wife Mary (my mother) out to dinner and during the course of the dinner agreed to sell the right to the wreck. Ian was going to try to recover the boat himself using a fishing trawler, but the Royal Navy beat him to it because one of their helicopters had recently sunk nearby. The boat was recovered on November 26th 1968 by the Royal Navy. Two days later, Ian was already working on it and had a full Bill of Sale signed by Don Pruett. Soon the Magnum 27 Tornado was racing again.”