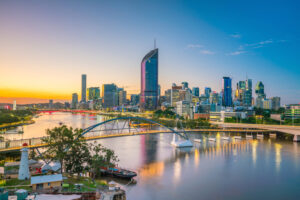 Brisbane will play host to the 2032 Olympic games, and super-yachters and boaters of all kinds are expected to be present. The Olympics have attracted boating crowds since time immemorial, and the 2032 Brisbane Olympic Games are expected to be no exception. Continue reading more below!

With the announcement that the 2032 Olympic Games have been awarded to Brisbane, Australia’s “River City” will be preparing for an influx of superyachts. The capital of Queensland is already establishing itself as a major superyacht hub for the Asia Pacific region, and the Olympics becomes the latest reason for yachts to try something new Down Under.

The 2032 Olympic Games will be a significant drawcard attracting superyachts to Australia. Had the last 18 months played out differently, we would already have seen international charter yachts shift towards Australia to take advantage of the new legislation passed in December 2019.

Tokyo 2020 and 36th America’s Cup in New Zealand were poised to draw a wave of yacht traffic to Australia on the back of the legislation changes, only for international borders to slam shut at a pivotal moment. Despite this, the Australian superyacht industry has still experienced a year of growth.

Brisbane is very much a service capital for large superyachts in the South Pacific region, but there is also an enthralling destination to uncover.

The Brisbane River gives superyachts the ability to berth in the city which is relatively unique for a host city and very attractive for owners who are expected to relocate their yacht as their private base for the Olympic Games. Moreton and North Stradbroke are just two of the stunning islands to discover in the surrounding area, while there are plenty of exciting activities and city luxuries for guests to indulge in. Large-scale infrastructure developments in Australia have prepared the country for an influx of foreign-flagged yachts, particularly in South East Queensland.

In addition to Brisbane, the 2032 Olympic Games will also be held across the Gold Coast and the Sunshine Coast. When Australia last hosted the Olympic Games in Sydney in 2000, the event triggered a boost to the superyacht industry with vessels attracted from across the globe. That the Olympics will be returning to Australia and hosted in a different city speaks volumes for the country’s diverse offering of destinations. Like Sydney, the Brisbane Games will allow superyachts to be placed close to the event locations.

“We see this as being vitally important to the industry’s growth, and this announcement will be another huge shot in the arm. The Superyacht Industry is worth well over a billion dollars to the Queensland economy, through construction, maintenance, berthing, and the growing charter sector, not to mention the thousands of jobs in Brisbane and regional centers. The global exposure which is associated with the Olympic Games will benefit our Superyacht Industry significantly, and I know we’ve got some of the smartest people in this industry in Queensland, and we are confident that the industry will capitalize on this outstanding opportunity with the support of the Palaszczuk Government.”

The Brisbane Olympic Games is 10 years from now, and over the course of that decade, we should expect to see the popularity of Australia and the South Pacific surge as an alternative to the ‘Milk Run’ for superyachts. The region caters to the increased thirst for adventure among superyacht owners and charterers, with destinations as contrasting as the rugged Kimberley and majestic islands such as Fiji. There is more reason than ever to experience the ultimate luxury in Australia and the South Pacific.