This week we are featuring a section from the Magnum Marine 45th Anniversary Book. Available for purchase CLICK HERE.

Searace was a nonstop, full-throttle affair that carried competitors from Miami to Nassau and back again through horrendous sea conditions. Designed to be one of the longest, toughest events in powerboat racing, it was modeled on the original Miami-Nassau race, the defining competition for US offshore racers in the 1950s and 1960s. The difference, of course, was that in 1986, when it first began, the boats were no longer wooden and the race, at 362 miles, was twice the distance of the original. 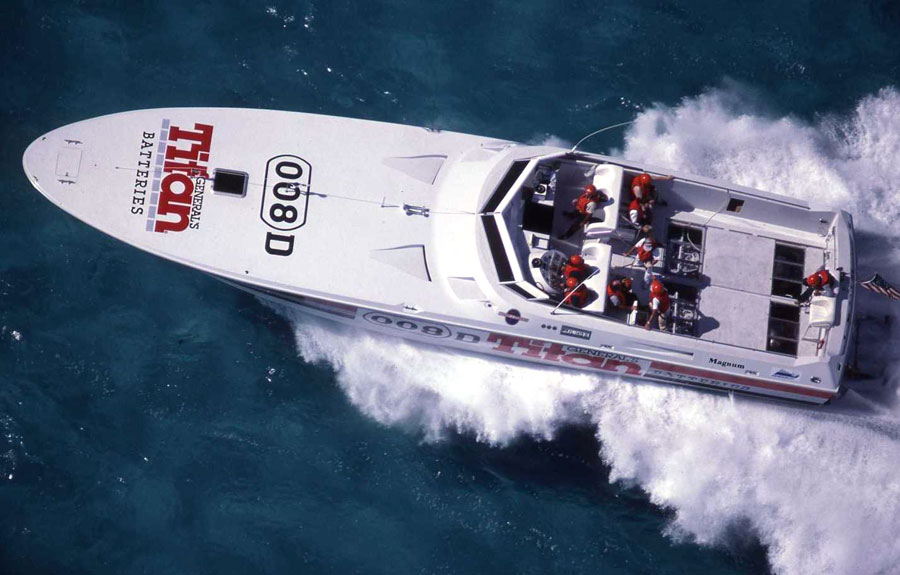 The crew of the Magnum 63 General’s Titan winning the Miami-Nassau-Miami race in 1986. This is the longest nonstop searace in history.

Leading the Magnum crew that first year was sixty-three-year-old Filippo “Ted” Theodoli, who owned Magnum Marine with his wife, Katrin. The Italian Marchese had bought the company in 1976 from its founder Don Arrow and during their first decade of ownership, he and Katrin had transformed Magnum into a world-class luxury brand. By 1986, Magnum was the yacht marque favored by European royals and aristocrats. the kinds of Spain and Sweden both owned Magnums. So did the ruling families of Kuwait, Qatar, and Bahrain.

On the racing circuit at that time, the general perception was that Magnum, which began as a manufacturer of hardcore race boats in 1966, had softened into a builder of large, stylish express yachts. Filippo wasn’t a seasoned racer, but he changed all that in the seven hours and twenty-eight minutes it took for Magnum’s General’s Titan to set and break multiple records, including the longest hull with largest crew to ever win a major offshore powerboat race. More importantly, General’s Titan was the only boat to finish the ocean race, which turned out to be brutal.

With its signature deep-V hull, the Magnum cruised happily along in waves that sometimes towered to 10 feet, as one after another of the racers watched their boats disintegrate in the harsh sea conditions. John Crouse, organizer of the event, wrote in his book Searace: A History of Offshore Powerboat Racing. “General’s Titan had averaged 48.5 mph for the 362.3 miles. While pokey by modern offshore powerboat racing standards, averaging near 50 mph in a giant diesel-powered pleasure boat was nothing less than phenomenal in its own right.”

Still, the racing community scoffed at Filippo’s victory – calling it sheer luck – until … to be continued next week.