Best Marine Radio: 7 of the Latest Options on the VHF Market 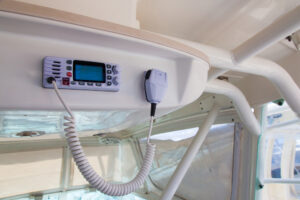 Marine radios are essential for safety and communications. There are many different kinds with features that can fit your needs. Each one has reasons to avoid and reasons to buy. Continue reading to see 7 of the best marine radios and their features.

Not only does a marine radio serve as a vital safety tool in case something should go wrong onboard, it is also a crucial communications tool with far wider use.

There was a time when marine radios were simply used for safety and direct communication purposes. However, there have been many advances over the years to increase functionality.

Many radios can now be registered with a Maritime Mobile Service Identity (MMSI) number so rescue services such as the coastguard can be supplied with information about who is sending a distress signal.

With so many options and features now on the market, from large units awash with features to more compact options with more limited functionality, we’re going to take a look at some of the best recent launches and compare what each offers.

Although handheld marine radios are increasingly impressive bits of kit, here we are going to focus on mounted VHF marine radios.

Icom’s IC-M506GE was launched as a replacement for its predecessor, the IC-M506. It is very similar to the previous incarnation but the latest iteration comes as standard with integrated GPS and an external GPS antenna.

As with almost all marine radios available in recent years which support NMEA2000 connectivity, it will also function perfectly well using NMEA0183 for current or older equipment.

Increasingly Icom fixed units are supplied with the option of a second station HM-195B ‘Commandmic’. Most functions on the IC-M506GE including DSC and AIS can be controlled from the Commandmic as well as an intercom between the two.

Weighing in at 1400g and measuring 178 x 113 x 104mm it is a little bigger than some other options on the market with similar specs, but not significantly.

This is the biggest, most powerful option in a recently released range by Raymarine, consisting of the Ray53, Ray63 and Ray73. All of these are equipped with a built-in GPS receiver and connection point for an optional GPS/GNSS antenna, which improves the GPS reception when the radio is mounted below deck or in an enclosed pilothouse.

Additionally the Ray73 (and the Ray63) can connect to Raymarine’s wireless VHF hub and can support up to two wireless handset stations for wireless communication anywhere onboard.

The Ray73 aims at being the communications centre for the boat and thus features a built-in AIS receiver and a loudhailer output. Ray73’s AIS provides collision avoidance and identification details for nearby AIS-equipped vessels to a networked MFD, chartplotter, radar, and instruments. When combined with an optional hailing horn, the radio’s loudhailer output allows communication with crewmembers on deck and can also generate manual or automatic fog signals when moored or underway.

As with most other options in its class, the Ray73 features NMEA2000 connectivity and is backwards compatible with NMEA1830 too.

Ray53 is a full-function VHF marine radio with Class D DSC and a built-in GPS receiver.

NMEA2000 and NMEA0183 networking for integration with onboard systems and It also supports the connection of an optional remote speaker to provide audio at a second location.

Unlike its two bigger brothers, the Ray53 does not support Raymarine’s Raymic wireless hub and handset system.

As with the other smaller radios in its class it does not feature a built in GPS antennae but it does have a connection point for an optional separately mounted one. It measures in at 168 x 88.5 x 173.75mm.

The Standard Horizon – GX1850G is a recent addition to the ever-expanding and growing Standard Horizon range of handheld and mounted marine radios. There are actually two models to look at here, the GX1850 and the GX1850GPS. The later has an integrated GPS while the former does not – though it can be connected to a compatible device.

Both radios have NMEA2000 connectivity allowing them to be plugged straight into the NMEA bus simply and quickly on installation. Though the radio features themselves may not require the absolute speed increase of data transfer offered by NMEA2000 over the earlier NMEA0183, it will serve as a nice bit of future proofing. Both these options will happily work with NMEA0183 too.

The Standard Horizon interface is pretty well established as easy to use, and a recent upgrade to what the company calls their ‘Easy to operate menu system’ should make DSC calling and programming even easier than before. The backlighting also makes it a doddle to operate at night time.

In a world of similar features, one of the key aspects that might have people reaching into their pockets to pick up a GX1850 is the size of the unit. It measures in at an impressive (for its class and feature list) 133 x 73 x 95mm and weighs in at 940g.

The Icom IC-M330GE is one of the smallest fixed VHF/DSC radios on the market. with a front face so compact that it is roughly the size of your modern smartphone measuring in at 156.5 x 66.5 x 110.1mm and weighing only 730g in total.

Given its small size, the radio is aimed at a market where space is at a premium and so there is necessarily some giving up of features seen in the larger units. However, quite a bit has been maintained even in a unit this size.

The unit is controlled via a directional keypad, with soft keys providing simple operation. Most used functions are assigned to soft keys for quick one push function access.

The IC-M330GE includes an integral GPS Receiver which also your current position and time to be used for DSC calls. The M330GE is NMEA1830 compatible.

The Simrad RS202S is another small, class D, DSC VHF designed with the smaller boat in mind but will still work well for medium and even some bigger sized yachts. It measures in at just 166 x 89 x 160mm and weighs 537g.

A rotary channel dial should make for quick channel selection, while large, well-spaced buttons provide quick access to key functions. Dedicated Channel 16 keys enable instant access to the emergency channel, and are included on both the radio’s front panel and its fist mic.

The RS202 does feature an internal GPS receiver and is also NMEA2000 compatible and will work with NMEA1830 also.

The Lawrence Link-6 radio has an integrated GPS receiver with four ways to ensure you have a GPS fix in the event of an emergency – built-in antenna, SMA connector for GPS-500 antenna, NMEA 0183 for chartplotter GPS and NMEA 2000 for network antenna connection.

A dual-channel AIS receiver monitors the position of nearby AIS-equipped vessels, helping you to avoid collisions in crowded harbours and waterways. AIS information can be viewed on the Link-9’s built-in screen, or overlaid on your chart or radar screen through a compatible MFD.

A NAV button on the face of the radio turns it into a navigational instrument displaying your Speed and Course. It also contains a Man Overboard (MOB) function, where you can drop a waypoint on your current location at the press of a button. The unit will enter MOB mode to show you how far away you are and where you need to steer to get back to the person in the water. The MOB waypoint is also transmitted over NMEA 2000 to the rest of your network.

GPS – A channel in a GPS receiver similar to a channel in a television set. It is hardware, or a combination of hardware and software, designed to separate one signal from all the others. A receiver may have many channels and typically the more offered the better stability and thus accuracy of the receiver.

MMSI – A Maritime Mobile Service Identity (MMSI) is a series of nine digits which are sent in digital form over a radio frequency channel in order to uniquely identify the vessel(s) communicating.

IPX7 – Waterproofing means equipment can be submerged up to 1 meter in water for 30 minutes.

IPX8 – Similar to IPX7, but the unit can be submerged in more than 1m (the specifics of the increased depth can vary from manufacturer to manufacturer) also for 30 minutes.

NMEA2000/0183 – A standard formed by the National Marine Electronics Association to ensure universality of electronics communicating with one another no matter the brand. NMEA2000 is the more recent of the two and can handle larger data packets at increased speeds.