Anatomy of a Magnum Marine Yacht 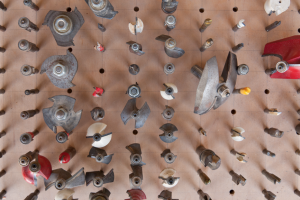 Router bits from the woodwork shop at Magnum Marine Shipyard

The uncommon marriage of a fast, bulletproof hull with a designer interior.

In 1993, Katrin Theodoli and a client were cruising the Intercoastal Waterway in Miami near the Magnum factory on a newly launched Bestia 50.

The client, who had just purchased the boat was anxious to take the wheel, but as he brought the boat back into the canal on 188th street, he inadvertently jammed the throttles forward and ran into the seawall.

Katrin recalls the sickening crunch of fiberglass on concrete as the 50,000 lb. boat ran up on the seawall. ” We’d never had a boat sink before,” she says. ” I took the wheel and was able to reverse back to our dock.” Katrin and the shaken client returned to her office while workers hauled the stricken Bestia to see what damage had been done. Katrin was expecting the worst, but shortly thereafter her manager came into the office to reassure everyone. “Bestia is fine. There is not a scratch on the hull.”

From the very beginning in the mid 60s, Magnums were built to handle brutal sea conditions.” This boat was designed for offshore use,” says Bernard Weisner, a multiple Magnum owner who also restores classic Magnums. “They don’t deteriorate. The hulls are super-tough. That’s why there are still so many around.” 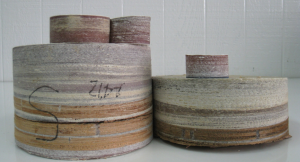 Lamination samples from bottom and transom of Magnum hulls

The latest generation of Magnums, made with high-tech materials like carbon fiber, Kevlar and high-strength epoxy resins, are considered the most seaworthy boats ever built. The heft of the Magnum hull, along with the twenty-four degree deadrise tend to part seas rather than leap over them.

Most Magnums are heavier than their competitors, but the excess weight increases the boat’s structural integrity and the quality of the ride.

” The bottom is made of hand laminated layers of solid fiberglass for exceptional strength”, says Michael Peters, the highly regarded  naval architect who designed the Magnum 80 hull shape and many of its mechanical systems.

Jay Coyle, yacht designer and Editor-at-large for Yachting Magazine notes: “Unlike many builders who have sought to reduce weight to achieve higher speeds, Magnum has chosen a more conservative path for reasons of comfort and safety. Indeed, mass is a key factor in Magnum’s comfortable ride.” “The Magnum hulls are practically unsinkable”, says Katrin. ” Each hull has an average of 23 separate individually laid glass or Kevlar or carbon layers  and is between 2″ to 4″ thick depending on the location. A hand layup takes a great deal of time and a Magnum hull can take anywhere from a minimum of one to four months to build. By comparison, the hulls of other boats can be built in less than a day and the chopped fiberglass is simply sprayed or infused.