An Insider Guide to Sardinia, Italy 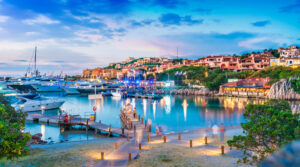 The island of Sardinia off the coast of Italy is incredibly stunning. Magnum Marine recently shared posts that were shot in Sardinia of the Magnum 70, which can be found here and here. Read the article below for an insider guide to visiting this beautiful island when it is safe to do so.

Sardinia is undoubtedly best known for limpid turquoise sea and exquisite beaches on the Costa Smeralda, but there are plenty of those elsewhere on the island to and for a fraction of the price. Food and wine are just as important here as well – the island is a designated ‘Blue Zone’, a region where the people live longer and healthier lives than anywhere else on the planet.

But unless you’re a fan of the History Channel, you might not know that Sardinia is one of the most mysterious places on earth. The oldest landmass in Europe, it has archaeological sites, discovered in the 1970s, that date from between 1900 and 730 BC (Sardinia’s Stonehenge). Little is known about the Nuraghic civilization, but there are over 7,000 stone fortresses (the oldest in Europe) around the island, and some of the giant statues created are over eight-feet tall, giving rise to the notion that Sardinia might really have been a ‘Land of the Giants’.

MORNING
Base yourself in the pretty port of Cagliari, the island’s capital, where there are regular street markets and plenty of lovely bars and restaurants, and begin day one by heading west to the charming town of Pula. From here it’s a short drive to visit the Roman and Carthaginian ruins of Nora that lie in front of the sea and which include mosaics, temples, and thermal baths. The tours are fascinating, thanks to the enthusiastic guides who provide plenty of information about the site.

After a morning of exploring, head back into the buzzy little town of Pula where there are plenty of places to eat and drink. S’Incontru (Piazza del Popolo, 63; 00 39 070 920 8128) on the main square is one of the liveliest. Take a terrace table, and watch the world go by while waiting for your wood-fired pizza, topped with the likes of prosciutto cotto e rucola (ham and rocket) or frutti di mare (seafood). There’s also a sushi bar and vegetarian options.

AFTERNOON
After lunch it’s back to Cagliari, with its handsome 19th-century biscuit-colored buildings and the impressive Museo Archeologico (Piazza Arsenale 1; 00 39 070 655911), which has exhibits dating from 6,000 BC. Unmissable is the Sardinian ‘stone army’: the large sculptures are 500 years older than China’s Terracotta Army. Afterward, don’t miss the San Benedetto market (Piazza del Carmine, every Sunday of the month, except the third, from 8am), where you’ll find local crafts and historical ephemera.

LATE
It’s a short trek up to the historic center to admire the Torre dell’Elefante (Via Santa Croce ang. Via Università), but only from the outside as it’s currently closed for restoration.

Not to worry though, your hike wasn’t in vain; Caffè Libarium Nostrum (Via Santa Croce; +39 346 522 0212), which overlooks the tower, is open for breakfast, lunch, and dinner, and it’s a prime spot for a sundowner. The appetizers (think cheese croquettes, crudo ham, crisps and nuts) come free, and the spacious terrace offers views over the city, port, and sea beyond. There’s also a full dinner menu, for which booking ahead is advisable.

MORNING
On the northwest coast, Alghero overlooks the sea and is a delight to wander around. Once conquered by the Catalans, some of the townsfolk still speak ‘Algherese’, a variant of the Catalan language, and the historic centre is still known as ‘Barcelonetta’. There are plenty of shops, as well as a marina where boats sail for the caves of Capo Caccia and Neptune’s Grotto. Alternatively, you could take a trip to Anghelu Ruju, where there’s a large collection of Domus de Janus (pre-Nuraghic tombs that were thought to be ‘fairy houses’, though they are actually tombs).

The food here has a distinctly Spanish twist, and paella can be found on many menus. After a bracing walk along the sea ramparts, follow your nose to Les Arenes pizzeria (via Lido, 73; 00 39 079 985907) for a meter of pizza, or book online for Catalan aragosta (lobster, a local specialty) or the famous porceddu (suckling pig).

AFTERNOON
By car, you can arrive in Nuoro in less than two hours. It’s the capital of the province of the same name, and the birthplace of Grazia Deledda, the only Italian woman to win the Nobel Prize for Literature. As well as visiting Deledda’s house, the town has a superb Museo del Costume (via Antonio Mereu, 56; 00 39 0784 257035), where visitors can explore the island’s distinctive culture. Close by, in the delightful Piazza Sebastiano Satta, named after the famous Italian poet, you’ll find sculptures by Sardinian-born Costantino Nivola.

From here you could head up towards the Costa Smeralda, stopping off at Olbia to visit the Museo Archeologico (Via Isola Peddone), which is shaped like a moored ship, in front of the old port. Displaying important relics of ancient Roman ships, this is a fascinating place to start delving into the history of this seafaring city before heading on to Porto Cervo to visit the beautiful Stella Maris church (Via Stella Maris, 1, 00 39 0789 92001), built by the Aga Khan in thanks for allowing his development of the area.

LATE
When dusk starts to fall, Porto Cervo has a small Piazzetta where the rich and glam sip cocktails with nary a thought for the bill (a coffee could cost €5/£4.50, and something with alcohol might set you back €30/£28), or you could splash out on a fabulous dinner at award-winning Blù Restaurant (Via dei Gabbiani; 00 39 0789 46929). Don’t miss the branzino (sea bass) baked under salt, and black fregola (handmade Sardinian ‘couscous’ blackened with charcoaled vegetables) served with prawns and asparagus.

For a more authentic Sardinian experience, try Agriturismo La Colti (Strada Arzachena-Cannigione, Cannigione; 00 39 0789 88440), where you’ll want to save room for desserts, which include the famous seadas (a large ‘raviolo’ filled with ricotta and drizzled with honey).

When to go . . .
There’s one golden rule: avoid August. That’s when the whole of Italy with mothers and kitchen sinks in tow storms the island, flooding the beaches and booking up all available accommodation. Prices go up too, and it can be excruciatingly hot. Just about any other time is fine, with May/June seeing the island at its best, with the clearest skies, while a balmy, post-blitz serenity descends on the island in September, when the crowds have departed and the sea is at its warmest. The depths of winter can see resorts looking a little drab and forlorn, though, and some places are closed until Easter.