Ali Karacan, the Turkish media mogul who owns Kat Cat, the magnificent yellow Magnum 56′, feels the same; only because he has a Magnum, can he freely go from his house in Bodrum, Turkey, to the numerous Greek islands in the Aegean for the day and never worry that he can come back in the evening. Recently he took Christiane Amanpour and her husband, James Rubin, for lunch—from his house in Bodrum to the Greek island of Patmos.

“We left Bodrum in the morning and arrived one hour later in Patmos, Greece. We were eating moussaka and drinking retsina, and in another hour we were back in Turkey. I do that often with friends. There are thousands of islands in the Greek Archipelago, both big and small, to explore,” he says. “Because of the Magnum’s speed and sea worthiness, we can get to one island for lunch and another for dinner. It is a wonderful playground. I cannot think of another boat that I’d be happier with—she has the perfect size and speed.” 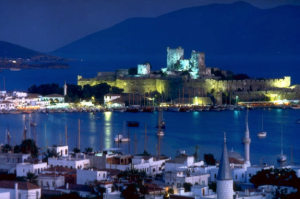 Ali bought Kat Cat for himself for his 40th birthday. She was shipped from Miami to Italy, and the crew then drove her from Italy to Athens, and from there to Kusadasi in Turkey. The seas were horrendous that day, but the crew kept driving all night from Athens to Kusadasi, and arrived just before midnight on his birthday. “It shows how much I wanted my Magnum,” says Ali. “And since then, I have been all over the Mediterranean with Kat Cat. “It’s the perfect boat for these waters.”

Ali, who says he intends to keep his Magnum Kat Cat “for life,” has maintained the boat exactly as he bought her, and when she is not docked in Bodrum in the summer, she is docked on the Bosphorous in front of his house in the winter.