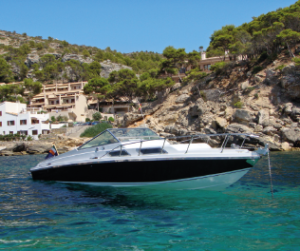 Check out Iain Finnegan’s testimonial about his Magnum 27′ Sedan!

My father bought the boat in the south of France in 1978 from Baron Edmond de Rothschild (she was built in 1971 but launched in 1975). Rothschild had commissioned the 75-foot motor yacht Bibo (by Cantieri Navali Liguri) which was one of the fastest of its size in its day (cruising at 20 knots and 24 knots max) and wanted a day boat too and wanted the best, so he bought the Magnum 27′! Unfortunately, his wife was terrified of the Magnum, so after less than 100 hours, she was put in storage until my father bought her and moved her to the Balearic Islands off Spain.

My father was invited to join a four-man syndicate of Magnum and Cigarette owners to run a private workshop and one of the four was King Juan Carlos of Spain who shared his Magnum 27′ with his best friend, Prince Zourab Tchkotoua (Zou). After a few years, my father decided to refurbish and re-power the boat which was done to the same specs as the King’s (to include handmade stainless steel exhausts amongst other things). After a while, the syndicate was disbanded and each went their own way. A number of years later I was leaving the port of Andratx and the King’s motor yacht, Fortuna, was anchored in the bay. As I passed by, I was waved at to come closer (much to the horror of the Naval escort boat!) and as I drew closer I saw that it was the King himself and he told me that I was driving his old boat! He had recognized the exhausts, however, I introduced myself and explained the syndicate connection. The King told me that he had loved his Magnum but had sold it and bought a Cigarette because his pal Zou had wanted more space.

However, the King (who was an Olympic sailor) said that he always regretted selling his Magnum 27′ as it was the best sea boat that he had ever owned (a sentiment that I share) and that it was far better than the Cigarette which pounded far too much.

I have recently bought a bigger and more sedate boat (a Sunseeker Superhawk 43) and I am now planning to bring my Magnum home to Ireland. I am relishing the prospect of blemming across Dublin Bay at 50+ knots and getting the chance to really exploit one of the world’s greatest sea boats in the Irish Sea!