The Original Magnum 27′: The Backbone of Magnum Marine

The Excitement of the 27′ 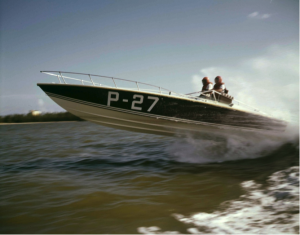 “It was the hottest thing out there. It will always be a highly collectible boat.” “The Magnum 27 is to me,” writes owner Aaron Hatz, “the purest form of offshore speedboat.”

It was this formula of tough and reliable fast boats that had been proven in competition that made it easy to convince the public that a Magnum was the boat of choice when they wanted to enjoy the thrills of high speed on the water for pleasure. It was a powerboat that people could buy with confidence, knowing that it came with a heritage of winning world championships, and with a toughness and reliability that became legendary.

Yachting also appealed to Katrin Schnyder, a young Swiss woman who had recently completed her PhD in History at the University of Bologna, and who was now working in her father’s international business in Frankfurt, Zurich, and Milan. In the summer of 1971, she joined a girlfriend who owned a small house in Porto Ercole, for a holiday by the sea. While there, her friend suggested that they go and take a ride on the new Magnum, which Filippo had just brought into port. Katrin met Filippo and saw and tested her first Magnum; she fell in love with both.

Together, they became Magnum’s greatest ambassadors in Europe, cruising the most popular ports in the Mediterranean, meeting with clients, and generally showing off the flashy Magnums among the more staid European yachts.