Check out this testimonial from Billy Martin about his Magnum 27′ and Magnum 31′! 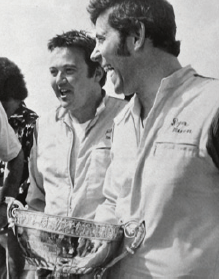 The 27’ was probably the most winning hull Magnum or Don Aronow ever made. In one race in California, I had Roger Hanks as a navigator and he took us to Mexico instead of turning at San Diego. Fifty miles off course. We continued on instead of quitting, and on the way back from Santa Barbara, Hanks was thrown out of the 27’. I didn’t know because he was standing behind; about 10–12 miles from there I noticed he wasn’t in the boat. I didn’t know how to find him, so I turned around and followed my wake back; ten minutes later I saw him and his orange helmet. When I pulled up to him he wouldn’t get in the boat, so I said, “Roger, Shark,” and he was in the boat instantly. We finished first in class and fourth overall. Mr. Kiekhaefer came up and congratulated us…

There are hundreds of stories of the best times of Magnum and racing history. And remember, Magnum was the only boat to come out and beat Aronow and his Cigarettes.