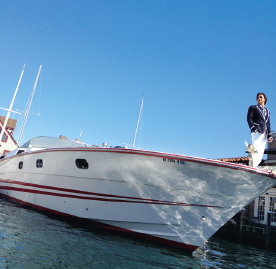 “There are many great love stories, but I like ours best.”

It was love at first sight, love of the stringers, to be exact. By the time I first saw her, I realized that the 1986 Magnum 53 would be mine. She’s a beauty, no doubt, yet after years “sleeping” on dry land, she looked cold and pale. And I, weary and forlorn, couldn’t show the slightest excitement.

Apathy aside, I finally came to open the bilge to face the sturdiest stringers up close. The strongest of stringers of all boats I had been on. It could simply be the humid bilge, or the overwhelming sensation of safety I never had with other offshore boats, there and then I felt a sudden warm rush…

After forty, I was ever so careful, more of given up, the idea of “coup de foudre.” That was midsummer 2012: the rest is history… Quality outlived our memory of its price-tag shock. More “myths” came along after we’re together. It read like typical urban legends: boaters would show up and claimed that their twice-removed cousin’s co-worker’s uncle had a Magnum and lived to tell the tale. And listened to their tales I did! From splitting a cruise ship in half to a ghostly Magnum haunting the coast of Sardinia.

Despite all, mine was the first Magnum they had ever seen in person. Indeed, it is über-exclusive after all. As for our love affair, what was intended as weekends was turning into long weekends, then started occupying two then three weekdays and is going on strong.